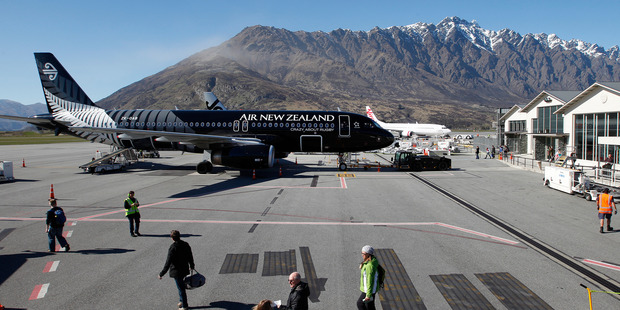 Flights in and out of Queenstown Airport were on hold this morning due to ice on the runway, in a “never seen before” snap freeze.

Chief executive of Queenstown Airport Scott Paterson said “half a dozen” flights were affected by this morning’s ice and this was likely to cause some delays.

While all international flights were running to schedule, other flights had to be diverted this morning, he said.

“There have been delays so people have been sitting around the terminal waiting for the runway to open.”

The runway was now clear of ice, and flights had recommenced, Mr Paterson said.

Detailed runway inspections were carried out throughout the winter, he explained.

“The feedback we had from the rescue fire guys who do this inspection work was they have never seen anything like this before.

“We basically had rain first up, the rain stopped and then suddenly Queenstown was snap frozen. All that water on the runway and the roads just turned to ice.”

This morning road users in Otago were also warned of severe black ice across several roads in the area.

State Highway 6 was closed between Cromwell and Queenstown due to ice on the road, police said.

State Highway 93 was also closed due to a crash near Three Stones Rd.

There had been “numerous” crashes in the area this morning due to the ice, Southern police communications Sergeant Mark Booth said.

He urged motorists to take extra care on roads in the area.