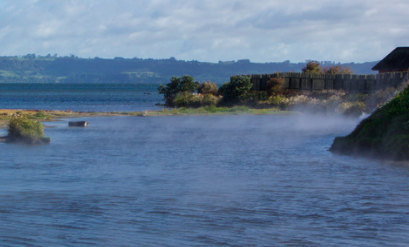 A Bay of Plenty resident has described her fear after waking to the sound of a “geyser” of water shooting 20m to 30m in the air from Lake Rotorua.

Ohinemutu resident Lani Kereopa was woken by the loud noise at about 4am and said it sounded like “a big thump and spraying sound afterwards”.

Kereopa said growing up in the pa she was used to geothermal activity but had never experienced something “on this scale”.

“Twenty five metres from my house a geyser was erupting out of the lake.

“I stood up, looked out the window…it was pitch black and I was thinking nothing much looks different even though it was dark.

Then another one happened and I saw water spraying up out of the lake.

“I panicked and ran downstairs to wake everyone up to say get out of the house, the village is erupting.”

Kereopa said she woke her family and they all drove up a nearby hill to shine the lights down on the lake to try to see what was going on.

She said she wasn’t sure what to do, or whether to wake up the rest of the village.
“It looked like Pohutu Geyser but with a lot more water.”

GNS has confirmed the hydrothermal eruption, with duty volcanologist Brad Scott describing it as unusual.

The style of eruption was one which hadn’t been seen in Rotorua since about 2000 or 2001 and was “slightly anomalous”, he said.

Scott said the last significant steam eruptions in Rotorua were about 15 years ago, and they weren’t sure why it had happened again.

Scott, from GNS Science, said there had been several reports of the eruption from people living in the village who had been woken by the noise.

He had been down to Ohinemutu this morning but was unable to identify the site, and he said conditions weren’t favourable for taking a boat out.

“A lot of people in the community there were aware of it.”

There have been reports of a water eruption in Te Ruapeka Bay off Ohinemutu this morning. Photo/Ben Fraser

Scott said the hydrothermal eruptions were common during the time the geothermal system was exploited heavily, but this was “much more of a natural event”.

Rotorua Lakes Council geothermal inspector Peter Brownbridge said it was nothing to worry about, although it was noisy and spectacular because of the geyser effect of the eruption.

“It must have been quite powerful to throw up a big column of water as it did but it’s nothing for people to be concerned about,” he said.

“Hydrothermal eruptions happen reasonably regularly in that area of the lake edge but they more often than not just cause a bit of bubbling up of water and mud from the lake bottom, rather than creating a geyser like this morning’s one did.

“We don’t see many bigger ones these days although eruptions like this were quite common about eight years ago,” Brownbridge said.

He explained the eruption was like a cap blowing off a well-shaken bottle of fizzy drink.
“They blow when the upwards pressure exceeds the capping weight so it can be quite spectacular, as we’ve seen this morning.”

The eruption was reported initially to Bay of Plenty Regional Council and, when contacted, Brownbridge reported it to GNS, as is routine.

“There’s nothing we can do but we’ll keep an eye on things and people can contact us if they have any concerns,” Brownbridge said.

Meanwhile, Kingi Biddle said he went to Ohinemutu after seeing reports of the eruptions on social media.

“I headed [there] to make sure everything was okay and say a karakia.”

Biddle said when he arrived just before 6am “everything was fine and dandy”.
He could see a slick that may have been created after the eruption.

“Apparently there were about seven or eight [eruptions] but by the time I got there it looked like a normal day. The ducks were back on the water.”

He said it was not far from Ariariterangi St where there was an increase in geothermal activity a few years ago.

“In this area it is just par for the course for the geothermal to want to find a place to vent.”