How is NZ today? 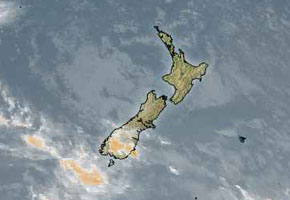 Well things are turning out mostly as expected today. A few morning showers cleared Gisborne and currently just off Great Barrier Island there are a few showers sneaking past, perhaps one or two might make landfall but it seems unlikely now as the greater chance was in the morning. Sunny skies elsewhere across the North Island with light winds, it’s really been a hum dinger up there lately apart from the unfortunate east coast but their turn has started to arrive today and will get nicer especially from Thursday as the flow turns more northwesterly. The mercury got down to 1 or 2 degrees in Auckland overnight, some sheltered spots got down to 0.

The South Island has high cloud across the lower half of the Island, mostly sunny in eastern districts however areas of cloud lower down on the West Coast. A few showers or periods of rain will be getting into Fiordland now as well. Temperatures were not as cold overnight as they have been in Central Otago due to the high cloud cover with lows of 0 to –2 for most although a little further north into Twizel –4 was experienced due to thick high cloud not having reached that far north by dawn.

A few light showers may move into Southland and southern areas of Otago this evening then tomorrow looks like a repeat of today for the South Island, the North Island tomorrow will be precipitation free although fog chances rise for the Central North Island, Waikato and Auckland at night so keep an eye on the forecasts.

Another stupendous sunny, blue sky day here again, frosty start at about 0-2 deg & a bit foggy but that soon disappeared as sun came up. Absolutely unbelievable run of this weather which is being enjoyed too the full.

It has been pretty good going lately up there hasn’t it, should continue for a few more days yet. Wet weather not moving in up there till later this week or early next week by the looks.