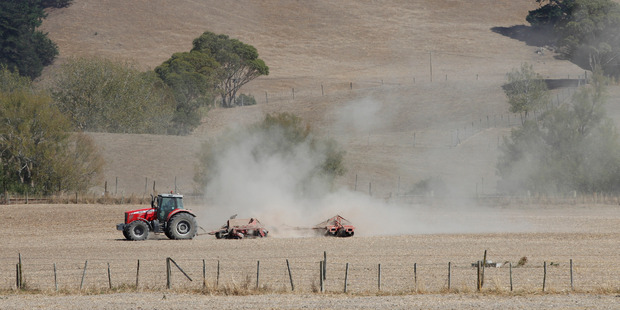 Days of widespread rainfall might have washed out the holidays for summer campers, but for farmers in many places it’s been merely a drop of what’s needed to replenish drought-parched soils.

Despite rain over much of the country since New Year’s Day, the latest climate map issued by the National Institute of Water and Atmosphere showed soil moisture in most regions was in deficit amid a summer intensified by a severe El Nino climate system.

Federated Farmers spokeswoman Katie Milne said that for dry places, the rain hadn’t come “anywhere near” what was needed to top up deficits.

“If we don’t get more rain to follow it up, we’ll just be back to square one.”

Among the hardest-hit operations were sheep and beef farms in dry areas, which were facing their second drought in a row and had been unable to repay debts from last summer.

Wanaka sheep farmer Phill Hunt said his area had received little of the recent rain, and the situation remained “pretty dire” for farmers in the Central Otago and lakes districts.

Northland sheep and beef farmer Roger Ludbrook said his rural district of Ohaeawai had been described as one of the driest in the country just three days ago, when rainfall totals had been down around 700mm to 800mm on what was needed.

“But this rain has been brilliant – basically, it’s going to hold off damage that’s going to be caused by the El Nino for another four weeks.”

Climate scientist Dr Jim Salinger said the burst of rain was the result of a Madden-Julian Oscillation – an eastward-moving pulse of cloud and rainfall from near the equator.

But he expected the next wouldn’t arrive until mid-February – if at all – and it wouldn’t be until autumn that the strong El Nino began dying off.

Last sentence does not make sense, the tense of El Nino needs a fix.