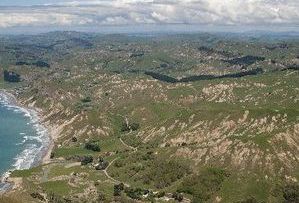 The ugly scars will be on East Coast farms for decades after a strip of land from Clifton to Blackhead received 500mm-1000mm of rain over two days in April, devastating farms.

Six months later, during a lush spring, the scars are so obvious photographer Bruce Jenkins felt compelled to capture them.

“While that’s not a huge amount of farmers, it affected them extremely badly,” he said.

It could have been a lot worse, however.

“It was a freak weather event that caused it to sit there – the rest of Hawke’s Bay got a lovely 100mm of rain and didn’t know what was going on at the coast,” he said.

Wairoa also had the devastating cascades.

“That’s what enabled us to get the medium scale event declaration from the Ministry of Agriculture.

“It allowed the Government to pay for a Taskforce Green recovery scheme and it involved the funding of my organisation, the Rural Support Trust.

“It also gave farmers tax advantages which meant they could defer income out of the present year and put it in an equalisation account and take it out the next year – so profits weren’t shown as profits because they were needed for repairs.”

Mr Barham said the psychological lift that came from the many who helped had been of enormous value.

“When it came down, the damage was overbearing – you don’t know where to start.

“But the help that came really cheered them up. At the start, they wondered how they would ever get their farms back into good order again.

“We had five teams of six guys working for six weeks – that was a huge lift to these people.”

Many thousands from the rural communities and industries volunteered their time. His role was to make sure resources were available and tasks prioritised so they “hit the ground running”.

The trust provided three diggers for 10 weeks to restore infrastructure such as stockyards, tracks and boundary fences. One farm lost more than 15km of boundary fences and four water dams. He said many farms would never be the same.

“You can’t take away 20 per cent of the grass-growing area and expect to carry the same stock. It has been proved uneconomic to resow the slipped areas. With no top soil, the grass burns off quickly on slipped areas which can take up to 80 years to recover – the research says there is very little advantage from oversowing.”

“They have all come through this very well mentally and they are very strong and I think a big part of it is everybody helped.”

The improved farm economy had helped as well.

“Luckily, luckily this has happened in a year of record prices which is just fantastic.

“There is a lot of optimism out there. It’s just fantastic to be getting a good spring and prices we have never seen before.”

Mr Barham is optimistic the high prices will remain.

“I’m 55 and I’ve been waiting a long time for the world to run out of food and I think its finally happening.

“I think it’s New Zealand’s turn, I think we may be in for a good period.”

Many people needed to be thanked, he said, for their time and money.

“I thought we had all been disastered out after Christchurch but I was absolutely humbled by the donations and labour that was given.

“On behalf of the affected farmers, I would like to thank the Hawke’s Bay community.”

Image / The damage wrought by the coastal weather bomb six months ago is still apparent over Kairakau Beach. It could take affected farms up to 80 years to recover / Bruce Jenkins

hi,
This is a interesting site on earth changes..
Pl. check it out..
thanks

Got this news from an another site….and not mentioned in your site..So thought to inform here..!
thanks..

Hi there, yes it’s true. There’s a story at http://www.nzherald.co.nz

Hi,
Thank you for the feedback and the link..
So that’s true..
That site reports for earth changes around the world..
Hmmm..that’s interesting..