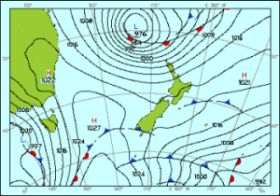 A deep low is expected to rapidly develop over the next 24 hours bringing a wet and windy few days to northern New Zealand.   High cloud is already moving in to Auckland with shower activity in northern parts of Northland.

The easterly flow has already started to build ahead of the system with gusts close to 70km/h at Cape Reinga.  Tomorrow and Sunday will see a high risk for gale force winds from Northland down to East Cape.

The eastern Waikato may also face severe gales for a time between late Saturday and late Sunday however with the wind direction being more south east it may not be as severe as previous storms.

WeatherWatch.co.nz will closely monitor the low over the weekend as even a slight shift in it’s predicted path could have significant consequences to forecasts.

What path do you think is most likely for the low to travel? for example is it going to brush along the northern east coast then head off east or continue on down the coast more before moving off?

We think it will brush Northland and East Cape then travel out east…but if it slows down too much it might feed in prolonged rain across eastern areas.