Home > News > High cloud in north, rain moving into No... 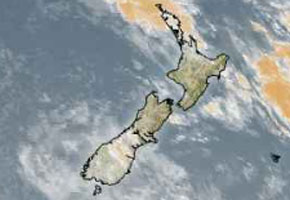 Well the weather isn’t too exciting when I start to talk about high cloud but there you go. This area of high cloud is branching out from a weak low pressure system that will slide past north of the North Island during today, some rain has moved onto Northland this afternoon and should clear tonight.

In the South Island the weather is warm out east north of Canterbury, also about Nelson. The lower half of the island is obscured by cloud and areas of showers. On the West Coast north of Hokitika there is a mix of cloudy areas and some sun, the odd shower passing through at times also. Christchurch has hit 20 degrees around midday but is sailing just under at present at 18.9.

The highest rainfall for the past 24 hours has been about our tallest peak, Mount Cook with 52.4mm.