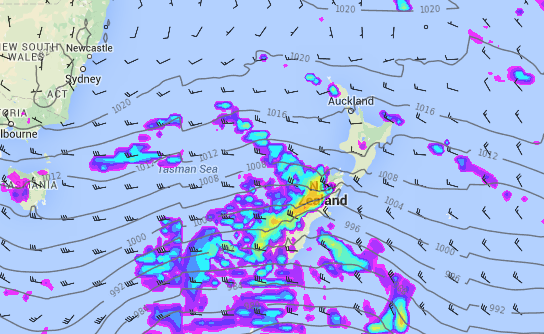 Updated 2:03pm — Highs today or tomorrow in the east of the country may reach 25 degrees, and it was yet another much warmer than average weekend with those as far south as Southland enjoying highs in the low 20s and shorts and t-shirt weather…all of this in the second week of May.

However as WeatherWatch.co.nz has been saying for two weeks now, around May 10th is the end of the sub-tropical air flow across the country – and the start of a new windy, westerly belt of weather. Put another way – here comes the true start to Autumn.

Tuesday still sees airflows across New Zealand from the sub-tropics.  Across Tuesday and into Wednesday a cold front from the Tasman Sea arrives and delivers very heavy localised downpours to the West Coast – and starts to flush away the sub-tropical northerly flow.

By Wednesday evening it will be wet in many western and northern regions – and the winds will be shifting westerly.

This is the next significant shift in our weather pattern – the rest of May sees far more windy weather, mostly from the westerly quarter.

We still see a few more sub-tropical northerlies and a couple colder southerlies – but for the most part we’re entering a phase of westerly weather.

WeatherWatch.co.nz expects warmer than average weather to continue in the north and east of the country – with the windy westerlies only adding to the dry, warm weather in the east of both islands.

The change to more westerlies also sees a few lows being dragged in around the country – but the bulk of the wet weather looks western coastline focused.

HEAVY RAIN:
Along the entire West Coast over the rest of the week

GALES/STRONG WINDS
Around the mountains, Cook Strait area and the eastern South Island.