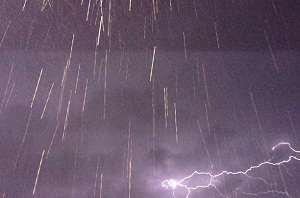 Showers and a few thunderstorms will be found about the country tomorrow.

At greatest risk for seeing heavy rain is the upper and western parts of the South Island.  Government forecaster MetService has issued a Heavy Rain Warning for the ranges of Westland south of Otira where a total of 150 to 200mm of rain is expected.  Rainfall rates may reach 20 to 30mm/hr, mainly during thunderstorms.

A Heavy Rain Warning is also in effect for the headwaters of the Canterbury lakes and rivers where rainfall totals of 170mm are expected near the divide and 80mm is expected within 15 kilometres of the divide.  Rainfall rates could reach 20 to 30mm/hr, mainly during thunderstorms.

WeatherWatch.co.nz Forecaster Howard Joseph says showers will also develop about the North Island tomorrow.  Early in the day, they will be about in a hit-and-miss fashion, mainly around the central North Island.  But at the top of the island, widespread showers are expected first thing in the morning.

During the afternoon, widespread precipitation should cover the northern 2/3 of the island.  Mr. Joseph is predicting heavy, thundery falls for Northland, Auckland, the Coromandel Peninsula, northern Waikato and eastern Bay of Plenty.

Mr Joseph says “The heavy rain will likely come down as localised bursts associated with thunderstorms.  The threat for thunderstorms and heavy rain in these areas will linger into late Sunday night.  So I think that some localised street flooding could be a real issue around Auckland.”

Widespread precipitation will cover much of the North Island by Sunday evening, although Hawkes Bay and Gisborne could stay relatively dry.

Winds may also be a problem tonight and tomorrow with blustery conditions developing over the eastern Mainland and central New Zealand.  Winds may approach severe gale strength in these areas on Sunday.

Mr Joseph also pointed that people with outdoor plans, especially trampers should remain alert for threatening weather conditions and be prepared to move to a place of safety.

How is Tauranga looking for tomorrow afternoon?

Should be a pretty rainy afternoon tomorrow with a slight risk for a few claps of thunder.

So you say the eastern Bay of Plenty… could some come over to Te Puke?

Te Puke doesn’t stand the best chance for seeing thunderstorms tomorrow, but there is certainly a risk during the late morning through early evening.