Heavy showers and thunderstorms moving in 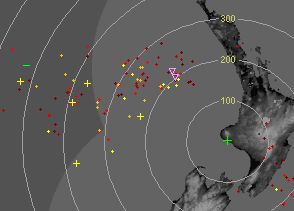 From Taranaki and Wanganui to Manawatu and Horowhenua, the next 12 to 18 hours look set to bring heavy showers, thunderstorms and dry, calm, spells in between predicts WeatherWatch.co.nz.

As the centre of the large low that has hounded the North Island for the past two days moves closer to the country so too will the heavy showers and embedded thunderstorms.

The centre of the low is expected to cross through central New Zealand during Sunday morning and as it moves in – and passes over – strong winds, heavy rain and thunderstorms are all highly likely…and then the sun should come out.

WeatherWatch.co.nz has this afternoon removed any chance of tornadoes from our forecasts apart from Taranaki which has a low risk this evening and during the early hours of Sunday morning.

However it’s worth noting if any do form they will likely be much weaker than Tuesday’s EF2 rated tornado in Albany and will be isolated.

Is there any chance that we will see lighting tonight over here?