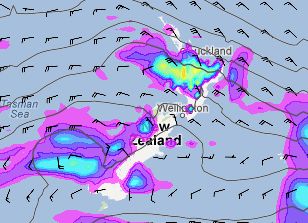 A front will be working its way across the country tomorrow.  This will spread rain chances over the western South Island and much of the North Island.

The eastern South Island to remain dry.  So eastern Otago and Canterbury should still have a settled day.  Marlborough could get in on some of the rain tomorrow morning.

The precipitation will works its way onto the North Island by sunrise tomorrow.  Most places will likely see at least a few showers.  However, the best chance for rain in the morning will be about Taranaki, Wanganui, the Kapiti Coast and Wellington.

During the afternoon, the focus shifts to the central and upper North Island.  Expect precipitation about most of the island.

By evening, rain will increase in areal coverage and intensity.  Heavy rain will be possible from Auckland south through the Waikato and then east to eastern Bay of Plenty and Gisborne.  That means Auckland and Hamilton could see heavy rain late tomorrow.  The best chance for heavy rain will be a bit further south in places like Te Awamutu and Rotorua.

Rain chances will ease tomorrow evening for Wairarapa, the Kapiti Coast and Wellington.