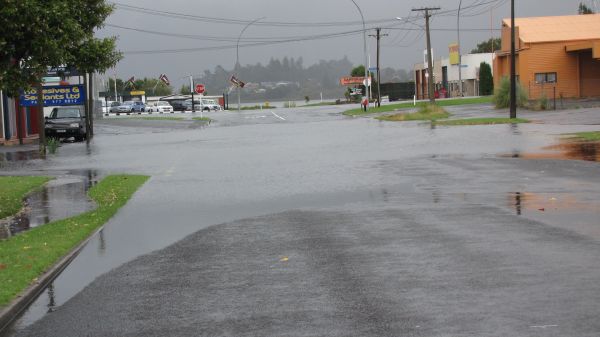 Heavy rain has causing minor to moderate flooding across the North Island today with conditions expected to get worse before they get any better.

Earlier today the Napier Taupo highway was closed due to extensive slips.  This evening NewstalkZB.co.nz reported the highway had reopened.

Waikato and Bay of Plenty have also received heavy downpours across the day with some Waikato centres receiving close to a months rainfall in just 24 hours.  The downpours are continuing this evening.

Have PHOTOS of the wet weather?  Use our simple PHOTO UPLOAD LINK to send them in to us!

The centre of the low today crossed Auckland and is this evening moving out towards the Tasman Sea.   Gale force southerlies on the southern flank of the low blasted Taranaki today although New Plymouth WeatherWatch reporter John Blackman says no damage has been reported.

Tonight the wind is moving in to Auckland as the low heads west with WeatherWatch predicting strong, gusty east to north east winds overnight along with a risk of thunder after midnight.

Torrential rain and isolated thunderstorms are continuing to move across the Waikato this evening, as of 7:30pm they were near Hamilton moving westwards.

Rain has stopped over much of the Bay of Plenty however the latest rain radar shows more rain moving in shortly after dark.

The low is going to pull down sub-tropical air and heavy rain, prompting a number of rain warnings for eastern parts of the North Island today.

The MetService has issued rain warnings for Coromandel Peninsula, Bay of Plenty, Rotorua, Gisborne and Hawkes Bay.  Rainfall numbers are predicted to be high with over 120mm of rain still forecast to arrive, that’s on top of heavy rain yesterday.

Tauranga and Mt Maunganui have had heavy rain off and on today as have Gisborne and Hawkes Bay.  While heavy rain is still falling across western Bay of Plenty and Hawkes Bay conditions have eased elsewhere, however this is only a breather period…

WeatherWatch.co.nz says a significant band of rain will move in later tonight.

PHOTO: The waterfall at the back of the fire station on Mt Te Aroha, eastern Waikato. Mr Clark says it’s usually only a trickle.
Photo : Roger Clark

Around noon today the centre of the low was lying east of Auckland and the tip of Coromandel Peninsula and during today and overnight tonight it will drift in the opposite direction to most lows.

Despite tapping into sub-tropical air the low itself is fairly weak and will be dragged along the northern flanks of a large high centred below the South Island.  The air flow will drag the low in a westerly direction towards Australia, pulling the saturated air in over eastern parts of the North Island and causing the low to go backwards compared to most pressure systems around New Zealand.

This system has the potential to bring heavy rain to drought stricken Northland later tomorrow and into Tuesday.

And heavy rain overnight has swollen the Hikuwai River in the Gisborne District.

Civil Defence controllers say it reached 11 metres this morning, only one and a half metres short of flooding the highway.

They are keeping a watch on the continuing rain, and say it is possible there will be more flooding.

Some minor roads in the region have been closed by surface water.

WeatherWatch.co.nz will closely monitor this system over the next 24 hours and we want to hear from you if you’re being affected by the rain.

Great stats – what part of Te Aroha are you in?  Photos would be fantastic.

Hi WW,
We are in town near the fire station close to the mountain as of 0900hr we have had a further 20mm putting us at 173mm

Rain has started to falling again in Tauranga. No thunder yet…. I hope there will be some later tonight…. Seems to be a lot out to sea on the lighting detector.

How’s the weather where you are?

Any new up dates from weather watch?????