Heavy rain, gales and snow in the high country coming 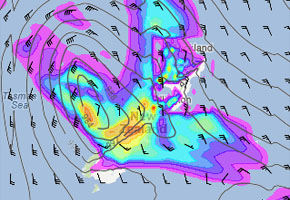 The low pressure system sitting just on the east coast of Australia right now is still on track to deliver some wild weather over the country this weekend.

WeatherWatch.co.nz forecasters say heavy snow is now looking fairly likely about inland areas of the South Island from North Otago through to Marlborough particularly in the east and about the main divide, falling to 400m earlier on Saturday in southern regions of the risk area then lowering down to 500m later on Saturday about Marlborough. Snow could lower to 300m later on Saturday in southern regions of this heavy snow potential area however by then snow will be easing and clearing at night with heavy frosts by Sunday morning.

The West Coast of the South Island will likely receive very heavy rain from afternoon on Friday then clearing on Saturday afternoon or evening, north of Buller will escape the heaviest falls. In the west of the North Island a burst of heavy rain is possible on Saturday morning and around midday however the likely hood of rain causing issues is unlikely.

Some heavy rain is likely on the east coast of the South Island also from North Otago through to about Christchurch on Saturday, up to 50mm on the coast for the day with 80mm more likely further inland.

As for the winds, very strong southeasterly winds gusting to gale force are likely about the main divide from Fiordland through to areas south of Hokitika on Saturday from midday then easing at night. Taranaki will get very strong northerlies on Saturday gusting to gale force. Wellington will get strong to gale southerlies developing overnight on Saturday then on Sunday strong to gale northwesterlies north of Taranaki in the west will give way to strong southwesterlies in the morning.

The Central North Island will not miss out on snow, above 800m will get some snow on Sunday from this system, particularly about the ski fields which will be welcome.

can you tell me if any snow is likely in Dunedin?

any chance of snow to 400 metres in southland

Hi there – at this stage we don’t expect snow (certainly not significant amounts) below 400m in Southland.  Even Queenstown is borderline.  Worth monitoring though – it does have the potential to drop snow down to 300m and the low is still evolving so slight shifts could have big changes.  One to monitor but at this stage no high risk for low level snow in Southland – sleet is likely in Gore and maybe Invercargill too.

I’m finding it hard to believe these sensationalised forecast, they haven’t been too accurate lately. certainly 24hrs out.

Remember if only 10cm falls to 400m and only 20cm all the way up to 800m the above applies. Last weekends snow fell around Arthurs Pass down to 740m and 10 to 15cm gathered, this event looks a bit meaner indeed so I believe the story above has merrit.

This really is a high country event so most in the main centers will not notice much apart from rain and strong winds which is mentioned above also.

Is Hanmer Springs likely to get the snow or the rain (or both)? Thanks 🙂

Hanmer is 380 metres above sea level so a bit border line, may only see rain but if it gets a bit colder then what I’m seeing with data then maybe later in the day on Saturday.

Perhaps need to go up a bit higher.

Any idea if there will be much if any Snow in Fairlie at 300m?

Might be out of luck in Fairlie although later on Saturday the air may get cold enough for some snow as mentioned in the story above.