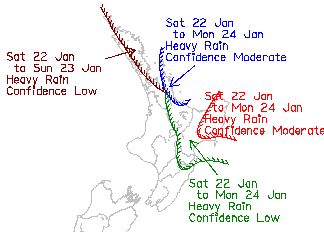 WeatherWatch.co.nz is predicting heavy rain will push back in to the North Island this weekend and into early next week, however this time it is taking a more traditional La Nina route, down the east coast.

The area of unstable, humid, air has formed in the wake of ex-tropical cyclone’s Vania and Zelia.  Head weather analyst Philip Duncan says the weather pattern north of New Zealand has dramatically changed this week.  “We are far more vulnerable to sub-tropical lows at the moment and we are likely to see a number of rain makers moving through, or near, north eastern New Zealand”.

Mr Duncan says the rain makers are likely to slide down just to the east of East Cape.  The Gisborne area has been dry and hot lately, taking the national high on Wednesday of 34 degrees. 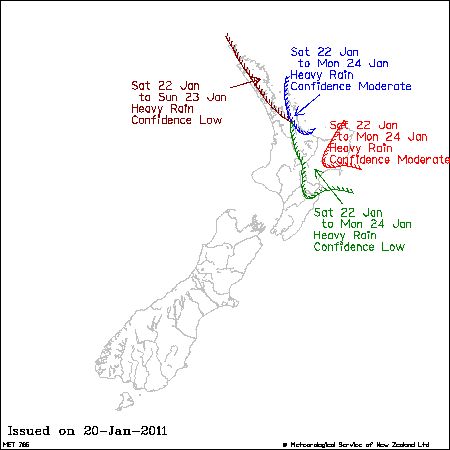 According to MetService data Gisborne has received less than 10mm of rain in the past 30 days and only 4mm so far this year.

“There will be a very fine line between the rain and the dry weather, with Auckland right on that boundary.  A slight shift to the west or east could be the difference between a wet weekend in Auckland or a dry one”.

Mr Duncan says current data indicates the weekend will see some rain but sunny spells too, especially on Sunday.

The Forecaster is predicting a moderate chance of rain warnings being issued in Gisborne, East Cape, western Bay of Plenty and Coromandel Peninsula.

Hey there, is matamata likely to recieve much rainfall in next week, things starting to look pretty bleak on the farm.

Yes we expect some rain for Matamata between tonight and Monday night – Waikato will be right on the border of the rain tonight but a new low is forming north of us (Cyclones Zelia and Vania left a significant change in their wake) so we expect a high chance of rain.  As to how much, well the models are chopping and changing so can’t be too specific just yet but the main rain bands are likely to be on the other side of the Kaimais but Matamata is still close enough to get some spill over.