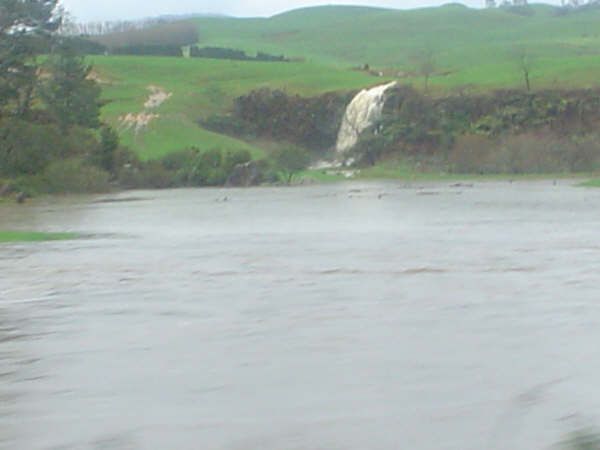 WeatherWatch.co.nz describes the system as “slow with a core of intense rain which may cause some flooding”.

WeatherWatch.co.nz says the low is expected to deepen quickly Saturday in the northern Tasman Sea bringing rain and wind to Northland, Auckland, Coromandel and Bay of Plenty by Saturday evening or Sunday, affecting northern and eastern facing regions.

As of 11pm Friday a few heavy falls remained over Northland but most other places had patchy rain.

On top of Friday’s heavy rain these next bands will increase the chances of flooding on Sunday and Monday in flood prone areas.

As the low deepens winds are expected to increase from the east or south east, especially for central New Zealand with those to the west of the Tararua ranges most exposed.

The view is spectacular, the fog is so thick. The Grafton Bridge and Domain are only the glimmer of passing cars in Grafton gully glimmer through the fog. It‚Äôs a shame I have not got my camera with me.

or is it a bit of a fizzer? Would be 11 months since the last storm that hit Te Aroha, only had 9mm so far and no wind, im almost dissapointed, or is this the calm before the storm??? Bev

Wind is still 24 to 36 hours away for most places…we can’t understand why other forecasters predicted gusty winds today.  Rainfall, definitely still has the potential.  There are two systems at play here…1) The front that passed over today & overnight tonight…2) the large low that will drift down on Sunday/Monday.   At this stage this doesn’t look like a major weather event for Te Aroha.  Will keep you posted if anything changes.

Just beginning to drizzle here now and getting dark!
Was down in Whangarei this morning and it was 22 degrees.

I believe that, I was up at 5am this morning outside loading the truck and it felt suprisingly warm so looked on the outside air temp to see it was 14.2c and that’s in levin, more than 600km south of whangarei. Was rediculously warm for a winter morning,