Home > News > Heat and heavy rain for parts of NZ this...

Heat and heavy rain for parts of NZ this weekend 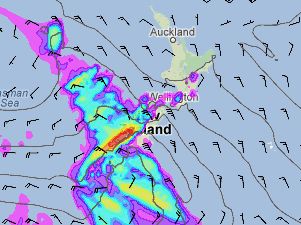 Summer sunshine courtesy of a large area of high pressure will bake the North Island today.  The highest temperatures are likely to be found about Gisborne and Hawke’s Bay.  That strong daytime heating could end up shaking up the atmosphere enough to create a few showers later today.  A few thunderstorms are also possible too, but the risk is very low.

There is a slightly better risk of the western part of the upper South Island today.  An advancing warm front could be enough to trigger showers and a few thunderstorms from Westland to Nelson.  The best chance of that happening would be late this afternoon and this evening.  Any thunderstorms that do develop will likely produce brief heavy rain.

More typical summer heat is on the way for Sunday.  The warmest temperatures will likely again be found across the eastern North Island.  Highs on Sunday could actually be about 3 to 5 degrees warmer across the North Island than what is expected for today.

More rain is on the way for the South Island on Sunday.

Precipitation, some of it heavy, is expected for the West Coast and the higher elevations of the Mainland.

“More rain for the South Island on Sunday” ?

We’re struggling with grass and bushfires in Canterbury and temperatures near 30 are forecast for Sat and Sun.

But anything that eastern Canterbury sees on Sunday will be the hit and miss variety stuff.  It looks like it will be quick and relatively light.

Certainly doesn’t appear to be the kind of precipitation event that will put a significant dent in the fire danger.