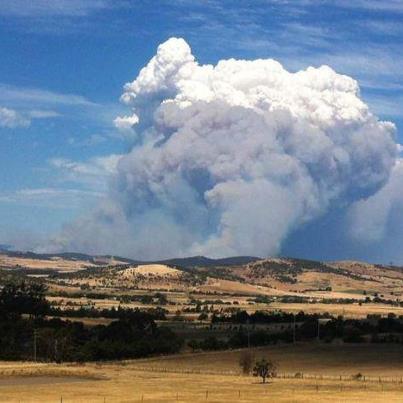 Temperatures are already over the 30 degree mark in parts of New South Wales this morning. Long Beach was 35.  Ensay was reporting 34 last hour.  Wodonga was 34.  Yass was 33.  Numeralla was 32.

Sydney was at 27 at last report.  However, low 40’s are forecast for the afternoon temps in Sydney.

Meanwhile, more than 20 uncontained fires are raging across NSW as thousands of firefighters remain on standby in the face of some of the worst fire conditions in the state’s history.

As the mercury began its steady climb this morning there were 100 fires burning in NSW.

“Fortunately none of these fires are posing any immediate threat,” he said.

“But clearly, under today’s conditions, we are concerned with those and we will be monitoring them very carefully.”

More than 1500 firefighters worked overnight to control the blazes.

There it a total fire ban on the entire state on Tuesday with temperatures in the state’s far west predicted to hit 45 degrees, while in Sydney the mercury is forecast to climb to 43 degrees – making it the third highest temperature on record.

People living in Shoalhaven, the Illawarra and the southern ranges face the most risk.

“We are shaping up for one of the worst fire danger days on record,” Comm Fitzsimmons said this morning.