Half a month’s rain in hours in Tauranga 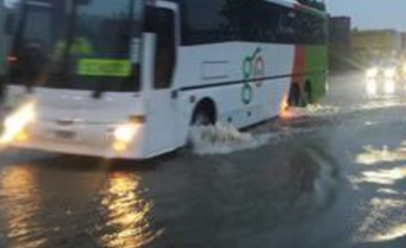 Tauranga has been hit by torrential rain this morning with more than half the average monthly rainfall falling in just a matter of hours.

A Bay of Plenty street has been closed to vehicles after sudden downpours this morning.

The low section of Maleme St, Greerton was closed due to flooding, but has just reopened.

A Tauranga City Council communications advisor said there was still no access to the transfer station.

Metservice forecasters are warning more flooding is likely in the area after 61mm fell in four hours. Anything greater than 6mm per hour in considered heavy while Tauranga has seen 18mm per hour.

The area is among other parts of the Western Bay of Plenty and the Coromandel Peninsula to have been drenched in the past few days.

Heavy rain causes road closure in Tauranga: Tauranga has been hit by torrential rain this morning with more th… https://t.co/CYOXUYFytL

Waikato Civil Defence said there was still a bit of rain hanging about the top of the peninsula but no reported problems this morning. All roads were open and there were no power outages.

Residents have been warned to expect around 80-120mm of rain until 10am on top of what has already fallen last night.

Since rain started falling yesterday Whitianga has been drenched with 100mm of rain fall.

Meanwhile today in Auckland, those out and about in the city should expect patches of heavy shower around the middle of the day which is expected to ease heading into the weekend. Temperatures will however remain at a balmy 24-25 degrees.

In the Waikato, rain is expected in the afternoon but that should also ease heading into the weekend.

Heavy rain in is expected in areas near Kaimai Range but should ease there around midday today.

In the lower parts of the North Island things are looking a little less wet.

After light showers tonight, the weather in the capital is expected to fine up with temperatures hovering around 20 degrees.

Residents have been warned to watch for heavy rain in the ranges of Westland from Franz Josef to Otira during Saturday, where rainfall accumulations may approach warning amounts.