Haast Pass slip: ‘Back to square one’ 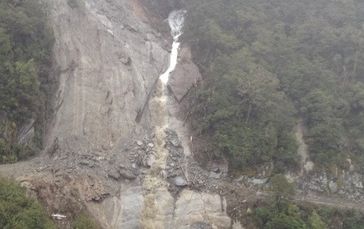 Heavy rain overnight has caused another major slip on Haast Pass, forcing the road to stay closed until at least Monday and putting work “back to square one”, the New Zealand Transport Agency says.

The route has been shut to motorists since Wednesday, after stormy weather caused major damage, including a 50 metre high slip at Diana Falls.

Snow and heavy rain overnight has brought down almost as much debris again as from Wednesday’s slip, which is thought to have produced 500 tonnes of debris, said NZTA West Coast area manager, Mark Pinner.

“In some ways, we are almost back to square one with our road clearing efforts at this site,” he said.

Workers may have to wait until the weather improves before the road can be cleared, he said.

“The forecast isn’t that great for the remainder of the weekend, although we hope a predicted break in the weather this afternoon, will allow our geotechnical engineer to see how much more slip material may have been destabilised.”

Three large boulders, which Mr Pinner described as about the size of houses, were perched above the slip site causing concern.

The road, which was closed between the Gates of Haast Bridge and Haast Pass Summit, would not reopen until Monday “at the earliest” he said.

Meanwhile, bad weather, avalanches and slips will keep State highway 94 from the Hollyford turn-off to Milford Sound closed until at least tomorrow. The situation would be reviewed again tomorrow morning.