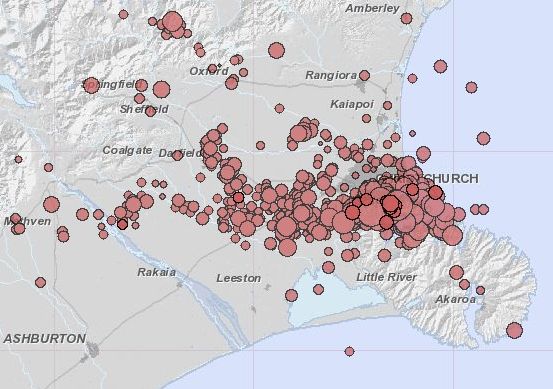 Usually this information is shown for longer time periods, such as 50 years; we convert it to show 24 hours. The system then considers all the earthquakes, large and small, that are recorded by the GeoNet network of seismographs. For each event, the probability that it will be followed by an earthquake large enough to cause strong shaking is calculated from the known behaviour of aftershocks. The shaking that would be produced by such an earthquake is then predicted from the known relations between earthquake size and shaking patterns. The likelihood of that shaking is then added to the background probability on the map.

How can I use this map?
The primary use of this map is educational. Watching the fluctuations in the probabilities will help you understand the nature of earthquake clustering and how the patterns change with time. In almost all cases, the probabilities are very low. The background probability of MM VI shaking in most of New Zealand is between 1 in 10,000 and 1 in 100,000. Immediately after a M4.0 earthquake, the probability of MM VI shaking in the next 24 hours rises to about 1 in 100 and then drops to 2 in 1000 within 6 hours. There would be no reason to change any of your plans because of this small increase.

The only time that the probabilities become large enough to affect you is after a significant earthquake that may have already caused damage. You already knew that aftershocks are likely in this situation. The map is showing you where those aftershocks are most likely to be felt and how the risk changes with time. Remember that this probability is for shaking large enough to knock objects off shelves or for slight damage. The probability of more damaging shaking is significantly less.

What are aftershocks, foreshocks and earthquake clusters?
The calculations in this system are based on known behaviours of aftershocks. Scientists have shown that the rules governing aftershock behaviour also apply to “aftershocks” that are larger than their main shock – i.e., the possibility that the first event was a foreshock. These rules include:

1. Aftershock Facts: In a cluster, the earthquake with the largest magnitude is called the main shock; anything before it is a foreshock and anything after it is an aftershock. A main shock will be redefined as a foreshock if a subsequent event has a larger magnitude. The rate of main shocks after foreshocks follows the same patterns as aftershocks after main shocks. Aftershock sequences follow predictable patterns as a group, although the individual earthquakes are random and unpredictable. This pattern tells us that aftershocks decay with increasing time, increasing distance, and increasing magnitude. It is this average pattern that this system uses to make real-time predictions about the probability of ground shaking.