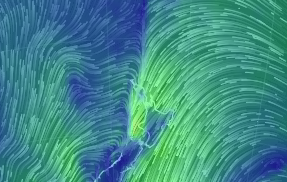 Updated 6:26am — Gale force winds have kept many Auckland and other northerners awake overnight – and they continue as daylight arrives too, but will be easing today.

The rain band, however, has already significantly fallen apart over northern New Zealand overnight, something WeatherWatch.co.nz said was quite possible yesterday due to the angle it was moving in from.

Heaviest rain as of 6am was actually around central New Zealand (top of the South Island, lower North Island) with only isolated showers and heavy downpours affecting the upper North Island with very large dry areas.

Flooding has also affected the West Coast.  The Westland District Council earlier declared a state of emergency in the Franz Josef and Waiau region after a night of extreme flooding.

Around a hundred people have been evacuated to the local community hall.

Flooding has swept through several hotels including the Scenic Hotel where the staff accommodation was under water.

The Top 10 Holiday Park campsite on the banks of the Waiho River was swamped by flood waters says the NZ Herald.

Back north and it’s also very humid and warm, with temperatures around 22 degrees at 6am in Auckland and humidity at 95% – the feels like temperature is in the mid 20s already with gale northerlies.

WeatherWatch.co.nz says while it felt quite stormy in Auckland, the winds have been hovering around gale force and gusting to about 80km/h in most places overnight.  This is still the case as of 6am. Some remote weather stations in exposed areas are likely to record higher gusts – but the 80km/h gusts are the official readings from both Whenuapai and Auckland airports.

Reports of multiple power cuts have been coming in all night – which is predictable and normal in an Auckland nor’easter, with trees breaking easier in this less frequent strong wind direction.

Head weather analyst Philip Duncan says the overnight gales aren’t being caused by a storm either. “It’s one of those rare cases where the winds can be blamed on a very large high pressure system east of the country, rather than a storm or low moving in.  It’s also known as the squash zone – the part on the weather map where all the isobars are”.

WeatherWatch.co.nz says as the sun comes up the added warmth could see the front over the upper North Island gain more energy as it moves eastwards today – creating heavier downpours and maybe even a few thunderstorms.

Bay of Plenty eastwards may see some big downpours developing today – and people in the north should keep an eye on the rain radars today as the sub-tropical flow continues, but fades out later.

Meanwhile rain in the South Island will ease the further south you head – but rain may linger around the upper and north eastern South Island areas for a number of hours.  By the end of today winds and rain/showers will have eased in most, but not all, places.

Showers may linger in some coastal areas on Good Friday – check our rain maps for more information.

– Image / The strongest winds on the back end of a very large high / Earth.nullschool.net