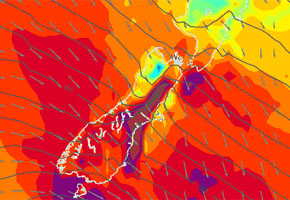 New Zealand is between a large high pressure system to the north of the country, and a big depression to the south today. We are stuck in the squash zone and this means very strong northwesterly winds.

Strong northwesterlies develop over much of the South Island and lower North Island this morning, winds are likely to rise to gale force about many eastern districts from midday with a big focus on North Otago through inland Canterbury and up to the lower North Island. Winds of 80 to 110 kph look likely and may gust up into the 130 to 140 kph range at times.

Rain on the West Coast of the South Island is likely to be very heavy from this morning with torrential falls of rain possible, thunderstorms are also likely too. Buller may not get heavy falls till evening when the main front associated with this system starts to creep a little further north later in the day.

For the upper North Island, conditions are a little more tame – mostly sunny weather at first in the morning, then areas of cloud increasing from afternoon. Overnight the odd shower may then move in.