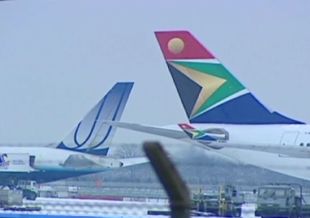 London’s Gatwick Airport was closed until Tuesday morning after 5 cm (2 inches) of snow fell in an hour Monday night, airport officials reported. Airport staff was working to make stranded passengers “as comfortable as possible,” but it advised other travelers to check before they left for the airport to make sure their flights were still scheduled.

And London’s Heathrow Airport, Britain’s busiest, only a third of scheduled flights were likely to operate Monday night, according to Donna O’Brien, head of commercial communications for Heathrow Airport operator BAA. Many of those stranded there may not get their Christmas wish of being home for the holidays, she added.

“Passengers should anticipate further delays and cancellations in the following days and potentially beyond Christmas Day,” O’Brien said. Airlines are currently updating which flights have been cancelled and the airport is showing the latest available flight information on its website, she said.

British Airways announced earlier Monday it had canceled all short-haul flights from Heathrow, but an airport official told CNN that other carriers’ short-haul flights were still operating. Passengers who use the Heathrow Express to travel to and from the airport on Monday are being offered the service free of charge. Tickets normally cost between 16 and 30 pounds ($25 to $46) for single and return trips.

Only one of Heathrow’s runways had been operational earlier Monday, a day after almost all flights at one of the world’s busiest international airports were canceled.

Hundreds of thousands of people were left stranded over the weekend, with many sleeping at the airport. Many have sent their stories in to CNN’s iReport.

“We’re still standing by for someone to tell us what’s happening,” one frustrated passenger complained after spending several hours at the airport and having at least two flights canceled.

“It’s a total disaster,” said another stranded passenger. Other passengers voicing their concerns to CNN said they received no offers of assistance from the airport, including food or a hotel room.

Passengers headed to Heathrow from Brussels airport will get there by coach or boat, after a shortage of de-icing liquids at Brussels Airport caused more airline delays, its website said.

And Frankfurt airport in Germany called off 325 flights out of a scheduled 1,300 to 1,400, spokesman Robert Payne said. Some of that is because of the weather in Germany and some of it is because of flight disruptions at other airports, he added.

The airport, Europe’s third busiest, has 450 people working “around the clock, deicing and removing snow,” he said.

Lufthansa airline announced it was gradually expanding its schedule after massive cancellations of its flights into and out of Frankfurt, Germany, to European destinations. A statement on its website advised travelers to exchange their air tickets for train tickets.

The company said it expects that “its scheduled services will largely be back to normal by Tuesday evening.” Long-haul flights were being flown Monday, it said.

In other travel news:

— Berlin airport in Germany was open, with some cancellations and delays, a spokesman said.

— Temperatures hit a record low in Northern Ireland overnight, the Met Office said, with 18 degrees below zero Celsius (zero degrees Fahrenheit) recorded in Castlederg, County Tyrone. There is no sign of a thaw, forecasters say.

Eurostar will operate a restricted service for the rest of the week, a representative said, because of bad weather, speed restrictions placed on Eurostar’s high speed lines, have added up to two hours to journey times.

Lines outside London’s St. Pancreas terminal are so long, Eurostar asked passengers not to come to the station, even if they have a booking. They are, however, offering refunds and exchanges to inconvenienced passengers.

Ground travel in France was also snarled by heavy snowfall and cold temperatures. The British Foreign and Commonwealth Office said Sunday that French authorities reported they are preventing all cargo trucks and buses from using roads in northern France and the greater Paris metropolitan area, and that car travel is “unadvisable.” Air and rail services were also affected, the office said.

The adverse weather in France affected pop singer Lady Gaga, who said on her Facebook page that all 28 of her tour trucks had been detained by the government for more than 24 hours.

A Lady Gaga concert set for Sunday night was rescheduled for Tuesday, according to the website of the Palais Omnisports de Paris-Bercy, where it was to be held. A Monday concert remains scheduled.

Paris police said that since noon Saturday, more than 1,300 trucks had been barred from entering Paris, and no trucks were being allowed to circulate in the city.

“We’ve got a few thousand people that have, unfortunately, had to spend the night,” said Andrew Teacher, another spokesman for the company at operates Heathrow, on Sunday. “We’ve been making them as comfortable as possible with blankets, with food and water.”

“We are extremely sorry for the disruption that’s been caused to people’s journeys today, but the decision has been made simply to avoid any kind of potential risk,” Teacher said.

“These are absolutely … freak weather conditions,” he added. “We’ve not seen a storm like this in 20 years.”

Near normal temperatures will slowly return across most of Europe this week, according to the CNN World Weather Center, however, temperatures from the English Channel across to the Baltic Sea will remain near freezing.

CNN weather models show that widespread snowfall could accumulate from 2 to 6 centimeters ( 0.8 – 2.4 inches) across northern Europe in the next 48 hours, with isolated amounts of up to 15 centimeters (nearly 6 inches) in southwest Britain.

For the Latest on this developing story go to CNN.COM or watch CNN live on channel 91 on SkyTV