Front for Monday – most to see some rain from afternoon 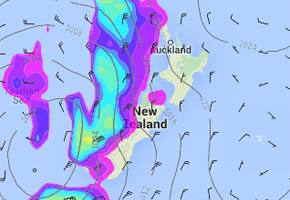 Indeed a front is moving over New Zealand tomorrow from the west, hooked into a low pressure system that will be mostly centred just southwest of the southern tip of Fiordland for the day.

For the upper North Island expect cloudy skies with increasing northeasterly winds, the odd shower moves into Northland in the morning then elsewhere during the afternoon. As the front passes over in the evening expect a more persistent period of rain then clearing around midnight as brisk northeasterlies change northwest. Highâ€™s will likely be in the 15 to 18 degree range with cooler temperatures being in inland
areas.

Increasing north to northeasterly winds for the lower North Island
also, out east there may be a few sunny areas early on however high cloud
thickens by midday. Showers once again move in during the afternoon in the west
then expect some evening rain before easing around midnight as northeasterlies
change northwest. The east coast from Gisborne through to the Wairarapa is dry
for much of the day, only later in the evening when the front moves over could
there be a few spells of rain for a time. Highâ€™s will be in the mid teens for
most although on the east coast temperatures may get up into the 17 to 18 degree
range.

The South Island has a similar story as the North Island although
timings are slightly different, rain develops on the West Coast in the morning
with northeasterly winds, rain heavy for a time from afternoon then easing in
the evening as winds change northwest. Cloudy for the Tasman Bay area with
northerlies and patchy drizzle developing in the morning, rain from afternoon
then easing later in the evening with northeasterlies changing
northwest.

Temperatures will be in the mid teen range for the upper South Island then when getting into Otago and Southland only double figure highs look more likely.