Friday not looking the brightest 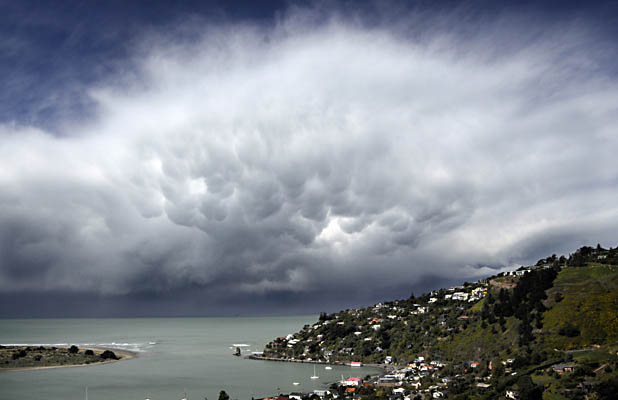 Thundery skies with heavy downpours hit parts of the north today and fog hung over Christchurch until midday and thousands of passengers were stranded for a time at the airport.

This appears to be the precursor for some chilly stuff moving over southern and central regions tomorrow with snow falling to quite low levels being the icing on the cake.

“For southerners tomorrow it’ll feel like yet again another taste of winter with rain and wind coming in tonight, overnight and tomorrow for most of us” says weather analyst Richard Green. “The wind will almost be coming off the ice so it won’t feel particularly pleasant for much of Friday even with skies clearing in many areas at some point during the day”.

North Islanders will feel the chill sliding north especially out east tomorrow and the front over the top end has been struggling to get much speed on and Northland and Auckland have certainly had their share of rainy skies and rumbles of thunder in places.

Thursday though delivered a mainly wet and cool day for Auckland with 16 degrees, Hamilton and Tauranga managed 18, Wellington topped out at 17, Christchurch cleared after early fog with 14 and Dunedin scored 15.
The warmest centre was Wanganui with a mild 20 degrees and Milford Sound was the lowest with 10.

WeatherWatch is still expecting a mostly sunny weekend with frosts coming back but it might take a little time on Saturday for everyone to be in the clear.