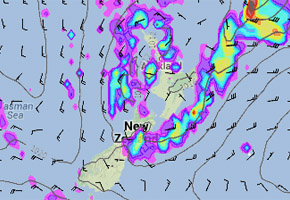 The low over the North Island weakens tonight and gets broader meaning it’s energy is not as focused as the past few days, so the weather should calm down a bit although areas of cloud will likely still be about. For the South Island some rain moves into Cantebuty overnight, mainly in the north, the lower south looks calm and frosty.

Northland, Auckland, Waikato and Bay Of Plenty
Clear spells and some cloud with light northeasterlies, there could be a rogue isolated shower here and there.
Lows tonight: 3-6

Eastern North Island
The odd shower about Hawkes Bay and Gisborne clears overnight, some rain moves in and out of Wairarapa at times. Light winds.
Lows tonight: 3-5

Canterbury
Cloudy or becoming cloudy overnight for Mid and North Canterbury with areas of drizzle or patchy rain, winds tend southerly. Rain could be heavy for a time about the Kaikoura area For South Canterbury expect clear spells with some cloud at times, mainly in the north of the district.
Lows tonight: -2-3