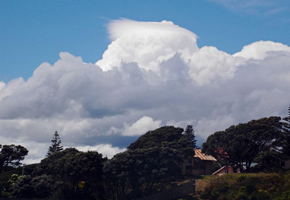 An easterly airflow covers the country tonight, areas of cloud for eastern regions of both islands with drizzle possible for some. Mainly clear with some high cloud in the west. Auckland northwards is where a shower or two is possible, Northland sees rain overnight.

Cloudy with the chance of a shower, mainly in the north. Breezy
easterlies.
Tonight’s Low: 12