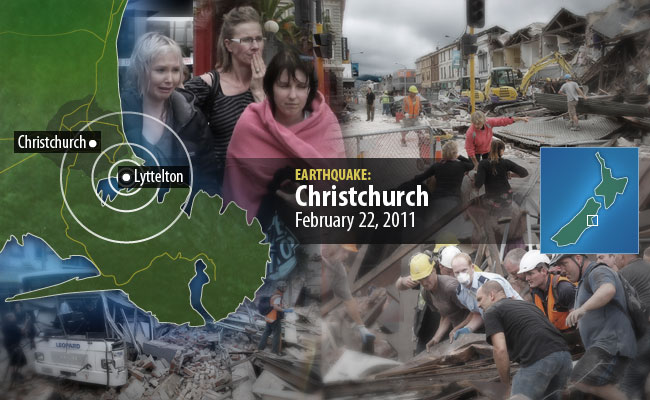 The forecast is fairly short and sweet for today and the weekend with the only noticeable factor being some cloud with a couple of showers about eastern areas but as the weekend rolls on they should disappear.

Winds about Wellington and the Wairarapa could certainly blow quite hard today for a time before easing later in the day.

The rest of the nation over the next three days see the chance of some cloudy spells otherwise mostly sunny conditions should prevail.

It’ll be fairly cool over southern and eastern areas of both islands today but not so fresh over other regions.

Saturday sees the temperatures start to climb a little and by Sunday the country should see near average temperatures, if not slightly higher.

Today marks the second anniversary of the deadly Christchurch earthquake on February 22, 2011 at 12.51pm.
185 lives were lost with numerous injuries, as a 6.3 magnitude quake rocked the city.
Latimer Square is the venue today for the commemoration and it’ll be cool with temperatures likely to be in the upper teens but conditions overhead will be dry.
Our thoughts are with those who were deeply affected by the event two years ago and who still remember it vividly.

Yesterday an area near a Wellington suburb ignited which lead to a few evacuations as the fire took hold over scrub and grass.
Fire crews were in attendance all day as the wind made it a flat fire initially but the southerly kicked in last night and turned it into a head fire which potentially makes it more of a challenge.
It appears to now be under control however.

The Waikato could be declared a drought zone today for the third time in five years.
Federated Farmers national president Bruce Wills said farmers were becoming concerned at the conditions in several areas, with many in the central North Island and parts of the south being forced to take action to cope.
The big dry has seen farmers getting rid of stock and monthly rainfall totals combined with the evapotranspiration have made conditions very difficult.
The outlook in the short to medium term is for little rain.

The Super 15 rugby competition starts this weekend for the New Zealand conference teams.
The Highlanders take on the the Chiefs in Dunedin tonight but it’ll be played under a roof at Forsyth Barr Stadium so weather conditions aren’t an issue.
Tomorrow evening sees Wellington as the venue for the Hurricanes up against the Blues.
It’s a dry evening and mostly sunny as the match gets underway and the stars should be sparkling by the end of the game.

The deciding oneday/night cricket international between New Zealand and England is set for tomorrow afternoon at Eden Park, Auckland.
Conditions will be dry under partly cloudy skies with temperatures in the mid twenties to begin with and dropping to about twenty degrees by the end of the match.Go the BLACK CAPS!

Thinking of you Cantabs down there today.
Not all Aucklanders are JAFAS .
We do think of you despite some not thinking clearly.
Go well.
Jason, on behalf of Aucklanders

Love all the info. Great work and off to the cricket tomorrow!

We’re sure the boys are up for a win and enjoy the game!