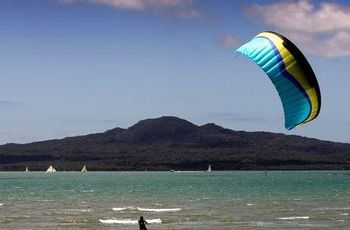 Four new volcanic craters have been discovered underneath South Auckland, bringing the total number of volcanoes in the Auckland Volcanic Field to 55.

Dr Bruce Hayward said the most prominent of the new volcanoes is a 300m diameter crater surrounded by a semicircular rim of volcanic ash in Boggust Park in Favona, Mangere.

“It is also one of the older volcanoes in Auckland.

“The crater appears to have been invaded by the sea 130,000 years ago, during the last interglacial warm period when sea level was 5-6 m higher than today. At that time Boggust crater would have been an intertidal lagoon, like Panmure Basin today.

“The tides eroded the wide open mouth that still exists between it and the nearby estuary to the east.”

Dr Hayward said the other three craters are in Puhinui Reserve, Wiri.

Each is about 200m across and sits on the crest of its own low tuff cone made of erupted volcanic ash.

One crater still contains a freshwater pond, while another has filled with pond and swamp sediment over thousands of years and is now drained and used as an equestrian arena.

Each has been eroded on one side by water overflow from their small crater lakes – a process Dr Hayward said would have taken tens of thousands of years.

He said the four craters have not been recognised before because they are not major landform features like many of Auckland’s volcanoes.

“Fortunately all four craters are protected within reserves and can now be cherished and managed as part of Auckland’s rich volcanic heritage – unlike many of the volcanoes that have been quarried away or buried beneath subdivisions in this part of Auckland over the last 60 years.”

“…The crater appears to have been invaded by the sea 130,000 years ago, during the last interglacial warm period when sea level was 5-6 m higher than today…”

Pity our beloved Pollies didn’t tax it 130,000 years ago…then we wouldn’t be putting up with all this ETS, AGW and carbon tax rubbish now!!

shouldn’t the title read, ” Four MORE Old Volcanoes Found under Auckland” ??? , because my excited died, when i read they weren’t in fact new.