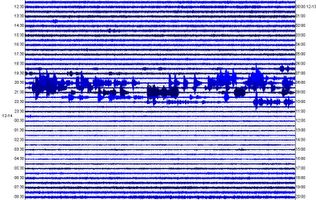 By Sara Page of GeoNet. Click here to read her blog — Two seismic stations in the Auckland GeoNet seismic network recorded the ground literally rocking to the Foo Fighters gig at Western Springs on Tuesday night.

The Herne Bay -HBAZ and Eden Park -EPAZ (with IESE-Auckland Uni) stations are 1.5 and 2km from Western Springs respectively and recorded a strong low frequency signal associated with the Foo Fighters gig.

The first vibrations were recorded around 7:30pm, part way through the Tenacious D set, but the biggest shakes started at 8:20pm when the Foo Fighters took the stage, and then it all went quiet at 11pm when the gig ended.

The concert vibrations were recorded as a semi continuous harmonic signal with a peak osculation of 3Hz, ie the ground was shaking 3 times per second in a nice rhythmic motion. There are lulls in the signal between the songs and peaks in signal intensity during the songs.

The cause of the shaking is most likely the weight of the 50,000 fans dancing, as 50,000 fans is equal to around 5,000 tonnes of mass moving(or moshing)on the ground for the duration of the concert. This set up a nice harmonic vibration in the ground which was recorded in our nearby borehole seismometers.

The sound system, probably contributed as well, especially the bass frequencies coupling in to the earth. The signal is similar to volcanic tremor that is recorded at places like Mt Ruapehu and White Island, however the strong correlation in time with the Foo Fighters concert and the fact it was only recorded on the 2 stations close to Western Springs assured us it was of man-made origin.

This is not the first time the Auckland instruments have picked up neat sounds, the Rugby World Cup finals were also seen.

Image : You can almost pickout individual songs on the signal! / GeoNet

Concerts like this make the noise levels of speedway pale into insignificance, have homes nearby on the side of the hill been checked for vibration damage?