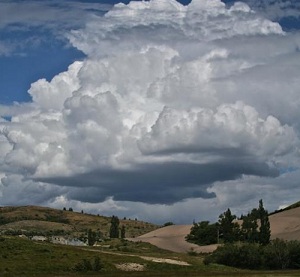 A sub-tropical low is still on track to bring some wet weather to parts of the country this weekend.

Rain is still expected to spread across the Coromandel Peninsula and then into the Bay of Plenty on Saturday.  The threat for heavy rain should remain off-shore until early Sunday morning.  The Bay of Plenty and the eastern Waikato are at the highest risk for heavy rain during this time.  Heavy could then move into Gisborne and Hawkes Bay during the afternoon and evening.

The western Waikato and Taranaki stand the best chance of seeing a dry weekend.  Rain may overspread these areas late on Sunday and into Monday.

For the South Island, a weak little boundary will try to trigger some rainfall for northern half this weekend.  Spotty showers could pop up in Tasman, Nelson, Marlborough and even northern Canterbury.  Unfortunately, these area the areas that don’t need rain.

For Southland and Otago, the news is not good.  The chance for rain is falling apart rapidly.

Originally, it looked like there was going to be enough instability to support the development of showers.  However, the models are now trying to build a nose of high pressure across the deep south.  That means that instead of the unstable atmosphere that would result in rain, a stable atmosphere looks more likely.  If that happens, dry conditions will continue.

At this point, it looks like the next best chance for any appreciable rainfall in those areas will by Tuesday and Wednesday of next week.