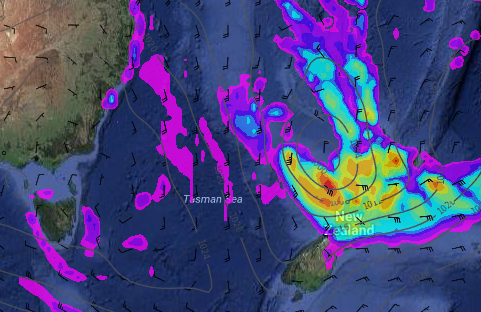 The remnants of ex-cyclone Debbie will this week cross New Zealand as a deepening low pressure system bringing rain heavy enough to cause areas of flooding in both islands says WeatherWatch.co.nz.

Most at risk for rains heavy enough to cause pockets of flooding are central parts of New Zealand – basically the regions around or near Cook Strait, especially those facing towards the Tasman Sea (Like Nelson and Taranaki).

But heavy rain could spread further afield as the tropical weather sets in with many North Island and South Island regions exposed to heavy rain for a time from this system.

The low will be sizeable as it deepens and this may also see damaging winds, made worse by our mountains and ranges.

WeatherWatch.co.nz says the heavy rain will develop as early as this evening around regions like Taranaki with off and on heavy falls lasting through until about Thursday, when the low crosses from Tasman Sea to Pacific Ocean.

Rainfall totals may well exceed a months average – in other words places like Taranaki may be seeing 150 to 250mm in the next few days.

This will see rain push into the east coast of the South Island with stronger southerlies while the humidity in the North Island finally eases with a westerly change.

Until then, humidity will be a main part of our weather for the next few days.

– WeatherWatch.co.nz will have extra coverage of this system across the week