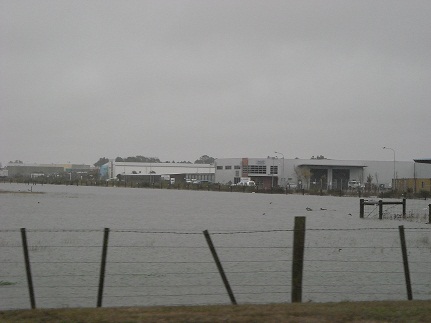 Many roads around rivers in Christchurch have been closed due to flooding, with dozens of others under threat.

Rain levels have picked up dramatically throughout the day, leaving the Avon and Heathcote rivers brimming even before high tide.

WeatherWatch.co.nz says that heavy rain will continue for the rest of this evening before easing.

Christchurch Civil Defence Controller Michael Aitken has warned people to avoid roads around rivers around high tide, and to take extreme care at other times.

Several schools shut early and some roads in the region are closed due to the dramatic downpours. The Port Hills end of Colombo Street is also starting to flood, with the rain running down Dyers Pass Road.

Further south, Otago Regional Council staff are in for a long night as they wait to see if rivers around Dunedin will breach their banks.

The Taieri River south of Dunedin is currently spilling over into flooding ponds and it is expected to remain high through the night.

Meanwhile, the Silver Stream near Mosgiel is also running high and is in danger of over spilling. The council says it would only take a few hours of about 10 to 15 millimetres per hour for it to breach its banks. Staff will be monitoring it closely through the night.

MET SERVICE HAS CANCELLED THE HEAVY RAIN WARNING? heavy persistant rain for the last 2 or 3 hours the heaviest of this 3 day event…the streets are runiing with water..rivers brimming at LOW TIDE! Rain shows no sign of letting up and with high tide i think we could be in serous trouble tommorow night with more heavy rain on the way

look into your sources properly. they lifted the warnings down south not chch

RAIN CONTINUING TO EASE OVER EASTERN PARTS OF OTAGO AND CANTERBURY
AND THE WARNING IS LIFTED. SEVERE GALES NO LONGER EXPECTED ABOUT
WESTLAND AND FIORDLAND VALLEYS.

The rain over eastern Otago and Canterbury is continuing to ease and the warning
for these areas is lifted. However, further light to moderate falls are still
possible for the remainder of today and Thursday. It is forecast to become
progressively colder overnight Wednesday in a strong cold southerly flow. This
cold outbreak is expected to bring snow down to near 200 metres in parts of
Southland and South Otago overnight, and to 300 metres in other parts of Otago
and Canterbury Thursday morning. A Severe Weather Watch for possible heavy
snowfalls from Thursday evening is in force for north Otago and Canterbury.

Note – there is also a possibility of further significant rainfalls over
Canterbury and the Kaikoura Coast during Friday and Saturday.

Severe gales are no longer expected about exposed valleys of Westland and
Fiordland and the warning for these areas is lifted.

WARNINGS NO LONGER IN FORCE

HEAVY RAIN WARNINGS HAVE BEEN LIFTED FOR: CANTERBURY, NORTH OTAGO AND
DUNEDIN – The rain has eased, although further light to moderate falls are still
possible.

NO FURTHER WARNINGS WILL BE ISSUED FOR THIS EVENT FOR THE ABOVE AREAS.

STRONG WIND WARNINGS HAVE BEEN LIFTED FOR: FIORDLAND AND WESTLAND SOUTH
OF ABOUT HOKITIKA – Severe gales are no longer expected.

NO FURTHER WARNINGS WILL BE ISSUED FOR THIS EVENT FOR THE ABOVE AREAS.

source was tv one weather, perhaps i should stick with weatherwatch