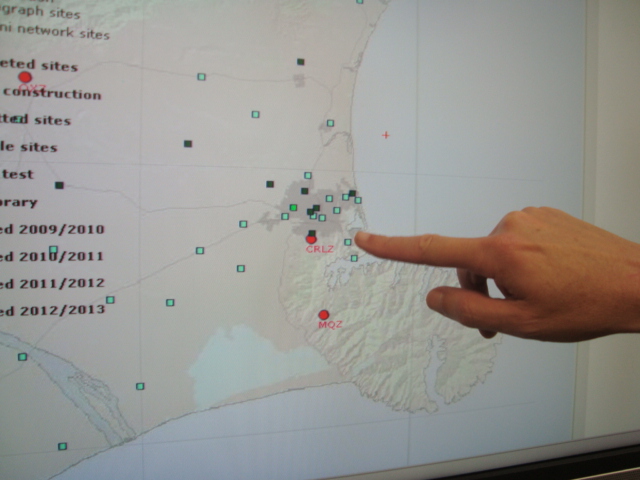 The size of Monday’s two biggest earthquakes has been revised upwards, as scientists revealed which areas around Christchurch were hit hardest.

The two aftershocks were revised up to magnitude 5.6 and magnitude 6.3 by GNS scientists as more data was incorporated into their analysis.

The adjustment came as an earthquake of magnitude 4.8 shook Canterbury yesterday afternoon, part of a continuing swarm of aftershocks.

“Technically this makes the magnitude 5.6 a foreshock, or precursor.”

“In comparison, much of the Christchurch CBD experienced greater than 50 per cent of gravity shaking during the February magnitude 6.3 earthquake,” Dr Fry said.

Sumner may have suffered intense shaking because of “topographic effects” that happen when landforms focus seismic waves like light through a lens.

Widespread liquefaction – particularly in the eastern suburbs – was to be expected, as shaking as low as 20 per cent of gravity caused liquefaction in February.

Dr Fry said Monday’s earthquakes occurred on a fault about 3km south of the Port Hills fault that ruptured on February 22.

Smaller aftershocks began in the same area four days after September’s earthquake and there had been six aftershocks of magnitude 4 or greater since February.

Scientists have said the high number of aftershocks since September’s magnitude 7.1 earthquake meant they were in “unknown territory” but Dr Fry said there were precedents.

“It’s not unprecedented globally. It is unprecedented in Christchurch because our historical record is so short. But sequences like this happen around the world.

“These sequences typically happen in places where you have high stress build-up and low recurrence rates, when the crust is particularly strong.”

Dr Fry said such sequences eventually tapered off but could take a while to do so because of the stress build-up.

He said the aftershocks were within GNS forecasts.

“The long-term implications aren’t any different than they were before [Monday’s aftershocks].”

University of Canterbury geologist Mark Quigley had muck from liquefaction come through the floorboards of his Avonside house on Monday.

He said because the faults in Canterbury had recurrence intervals of several thousands of years or more scientists were learning as they went.

“There wasn’t any evidence of previous earthquakes on these faults that we could see … we’ve never really had a sequence like this in New Zealand.”

Meanwhile, a laser scanner was sent to Christchurch from Wellington on Monday night to map, in 3D, fresh damage on the coastal cliffs in the Sumner and Redcliffs areas.