Few thunderstorms in Fiordland, wet in the North Island but easing 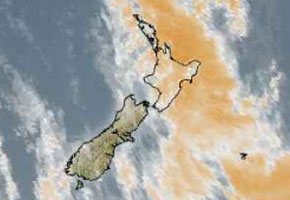 Today looks to be shaping up mostly as expected. A front from the southwest is moving over Southland now bringing showers, Fiordland has experienced a few thunderstorms so far as it moves onto the ranges there. A few showers in other areas of the West Coast with mostly cloudy skies and some rain about northern regions cleared this morning however a few showers look to be moving into the area again from the west early this afternoon.

The east coast is receiving mostly sunny weather with some cloud about and light winds, temperatures are up to 18 degrees in Christchurch with even a few 19 degree readings about the district. Yesterday and today haven’t felt like winter in these parts, really makes the weather interesting considering on the 6th June we had heaps of snow and it didn’t go past 1 degree all day, and we are meant to be more into the depths of winter now? Some will try to come up with a theory for all the extremes but to me it’s just the weather and I love it’s diversity. It will change for a brief time later today in Canterbury as that southwest change currently in Southland moves through but tomorrow is looking like a sunny one again although temperatures should stick around the mid teens or perhaps a tad lower.

Heavy rain has pilled into the west of the North Island this morning however is now easing in some places, the east coast has been getting warm temperatures up into the high teens although with plenty of thick high cloud. Northland a little cooler then I initially expected about the mid teens, the cloud and rain must really be stopping it from creeping up although there is some time left in the day so perhaps a degree or two could be added to that yet.

No more heavy rain for New Zealand tomorrow, a few showers about still mainly in the North Island and southwest of the South Island. Becoming more settled and sunny by Wednesday as an anticyclone from the west moves in however showers will persist on the West Coast south of Greymouth.