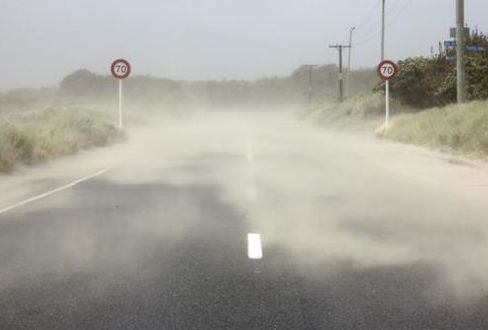 Gales gusting to 115km/h in Invercargill have cancelled the Burt Monro Challenge and are now starting to cause minor damage.

WeatherWatch.co.nz’s Invercargill Malcolm Gayfer says the winds have been building all afternoon.  “The winds are absolutely ferocious right now in Invercargill” he reported a short time ago.

Mr Gayfer says the winds aren’t cold, despite the city recording the lowest national high today with 13 degrees – which was recorded this morning before the winds increased.

He says a few boats have had mooring difficulties in Bluff Harbour.

On Wednesday WeatherWatch.co.nz advised boaties across the entire country to check their moorings ahead of the blast.

On WeatherWatch.co.nz’s Facebook page readers have this evening said that recycle bins are being blown all over the place while another reader says his TV aerial has been broken.

“Twigs and branches over the roads, my windows/house is creaking like mad, windows are filthy” wrote ‘Pink Robo’ on our Facebook page.

The windy weather will ease overnight in Southland but increase elsewhere, especially along the eastern coastline of both islands.  The lower North Island, in particular Wairarapa and Hawkes Bay, may also receive very strong winds overnight and into Saturday morning.

Photo / The Burt Munro Challenge beach racing today has been cancelled. At 3.30pm the wind in Invercargill was gusting up to 115km/h – Photo courtesy of Invercargill City Council’s Facebook page.