Ex-Fina begins to unleash wind and rain on NZ 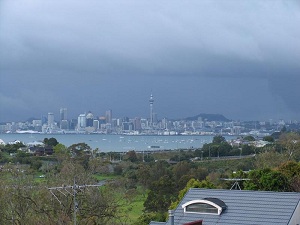 Ex-cyclone Fina has arrived and the upper North Island is already dealing with blustery conditions and a mix of rainy and dry spells while heavy rain sets in across Nelson.

The system has many similarities to the sub-tropical rainband that flooded Nelson before Christmas.  It’s another slow moving low in the Tasman with a large slow moving rain band to the east of the low, currently pushing into Nelson.

While overall the system doesn’t pose quite the same flood risk the risk to human safety is elevated with more people in the outdoors.  This is a very popular time for Kiwis to be out camping, tramping and boating.  Everyone needs to be aware of this ex-cyclone and the heavy tropical rains that come with it.

The main threats for flooding include small streams and low-lying areas.  There could also be some coastal flooding in the north of both islands and blustery conditions are making for choppy seas. The next three to four days will be wet and windy across many parts of the country.  Even though the low is weakening and the wind element is becoming less and less of a factor, the rain element is actually growing.

Flooding risks exist across all regions with current rain warnings as do the risks of slips – especially following the heavy rains two weeks ago.

How come the HIGHS never stall over the country…only the LOWS?