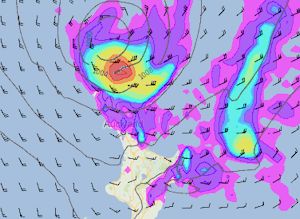 It looks like Evan is going to end up passing just north of the North Island early Monday morning.  The means the majority of the heavy precipitation associated with the former tropical cyclone will end up further north as well.

The first band of precipitation from Evan should arrive tomorrow.  The best chance for seeing showers tomorrow morning and afternoon will extend from Northland, southeast through the Coromandel Peninsula, to Gisborne and maybe even south into Hawke’s Bay.

By evening, rain is expected for Northland, Auckland, the Coromandel Peninsula and Gisborne.  While rain is not expected for Hawke’s Bay tomorrow evening, it looks like it will probably redevelop during the pre-dawn hours on Monday.  That will be due to the winds turning a bit, creating more of an onshore flow.

From Auckland to Hamilton and over to Bay of Plenty, showers are likely but heavy rain is not expected.  Showers are also expected from Gisborne to Wairarapa.  That means that Hawke’s Bay may finally see an extended period of measurable rainfall.

Monday evening will see showers chances head west about the lower North Island.  So Taranaki and Wanganui could end up seeing some precipitation as well.

On Christmas Day, Evan will continue to head out over the Tasman.  That will help a broad northeast flow develop over the North Island.  That means a fairly breezy and humid day can be expected with plenty of chances for showers for much of the North Island.  They day won’t be a total washout as this will likely be the hit-and-miss variety of precipitation.  Most of the widespread precipitation will be found about the eastern and lower regions of the island, especially after mid-afternoon into Tuesday evening.

Evan is expected to turn back around and head east on Wednesday, bringing it back across New Zealand.  That will keep precipitation chances in the forecast for much of the country for Wednesday.

Of course, Evan is still being cheeky.  There will still need to be some fine tuning done to this forecast over the weekend.  But, I think it’s pretty clear that Evan most of Evan’s heavy rain and strong winds will just clip the northern end of the Northland.