Evan and NZ- A closer look 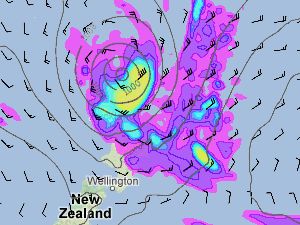 But, by the time this storm gets here, it will be nothing like it was when it hit Samoa and Fiji.

With Evan moving out of the tropics and slamming into a large high just off to our south, it will lose a lot of the energy needed to sustain itself and be ripped apart at the same time.  So, it will be a lot weaker by the time it arrives early next week.

In fact, before Evan even reaches New Zealand, the sustained winds should be below 40 knots (75 km/h) with maximum gusts at around 50 knots (93 km/h).  At that point, it will still be some 300 km north of the Coromandel Peninsula.

All times are in GMT.  New Zealand Daylight Time is +13 hours

So what will Evan bring to New Zealand?

For the upper and eastern North Island, Evan could make for a pretty wet and windy couple of days, starting on Saturday.

WeatherWatch.co.nz Head Weather Analyst Philip Duncan says “Saturday to Monday look wettest and windiest with conditions easing on Monday.  By Christmas Day it looks as though the final scraps of Evan will cross over the eastern North Island hopefully with enough energy for an early morning Christmas present for farmers desperately in need of rain – then it should clear during the day for most places”.

The South Island and lower North Island are expected to be only slightly affected by Evan’s remnants with the South Island having brilliant Christmas Day weather for most main centres under that ridge of high pressure.

This forecast is likely to still need some fine tuning as we go through the next few days.