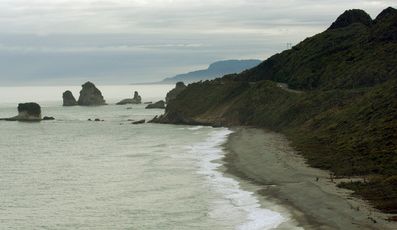 An entire beach at Punakaiki on the South Island’s West Coast has disappeared in under a year, with the loss of 30,000 cubic metres of sand.

“I’ve never seen it happen like that before. The whole beach has basically disappeared.”

King tides over the weekend threw rocks over the seawall, flooded a motel and demolished a fence.

Mr Moen said the latest results of regular cross-sections taken of the beach showed that 30,000 cubic metres of sand had gone.

He said the seawall had sustained damage in the past couple of months, and repairs were under way before the king tides hit at the weekend. The sea had cut into the wall and some of the rock had slipped, but the structure of the wall had not been compromised.

It could still be walked at low tide, but it was a lot lower than usual.

Earlier this year, property owners on the south side of the township feared that rapidly advancing erosion was threatening their properties.

– APNZ
By Laura Mills of the Greymouth Star