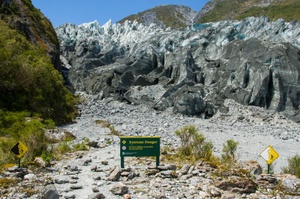 The El Nino weather event predicted to dump rain on the West Coast this year could actually help the rapidly retreating glaciers, according to a scientist.

However, he also notes that one good year will not be enough to reverse the overall trend toward retreat.

University of Canterbury geographer Dr Heather Purdie said she had been monitoring Fox Glacier since 2005 and was increasingly concerned about the impact that climate-driven glacier retreat would have on glacier tourism.

Dr Brian Anderson, a Victoria University senior research fellow in glaciology, said El Nino tended to bring cooler, cloudier and wetter weather to the West Coast – “and all of those things are good for glaciers”.

Fox Glacier and its northern neighbour Franz Josef Glacier advanced in the 1980s to 2000s because of a series of El Nino years, especially in the late 1970s to early 1980s, and again in the 1990s.

However, the past few years have been mostly La Nina weather, and as a result the glaciers had all been losing ice at a rapid rate, Dr Anderson said.

“We haven’t had a good snow year on the glaciers since 2007.

“It is the same story around the world, with increasingly higher rates of ice loss from mountain glaciers,” he said.

“Let’s hope that the predicted El Nino does happen, because that will be good for the glaciers – but it will take more than one year to turn around the losses that we’ve seen in the last six or seven years, and it also takes a few years for larger snowfalls to be seen as an advance at the terminus.”

In the longer term, global warming would outweigh the short-term El Nino-La Nina variations, he said.

The glaciers would still advance from time to time, but it was unlikely that they would get as long again as they were in 2008, and by 2100 “it may not even be possible to see Fox or Franz Josef glaciers from the valley floors”.

The National Institute of Water and Atmosphere has given a 50 per cent chance of an El Nino developing over winter.

Those of you who continue to deny Climate Change are so fuddy duddy and “yesterday” in your thinking. Your thinking is so archaic and you have nil data whatsoever to back your own arguments, so all you can do is waffle and blame the oscillations. Before you outright deny Climate Change because it is okay where you live, I suggest you take a course in orographic meteorology and then do some research on what will happen to certain areas of NZ. You might be surprised at what is taking place right now under your very noses. And remember, you cannot use overseas models for Climate Change in NZ, as they are non-applicable. NZ-specific CC is one where I have never seen any deniest come up with an equitable answer yet. That is because your heads are in the clouds.

I have been noticing there has been a more tendancy of the girl, La Nina weather systems lately, say over the past decade, rather than the boy, El Nino. so any El Nino system that is likely will rather weak.

Welcomed cooler weather which should enhance the glaciers but there will be a tendancy for a return to La Nina conditons which seems to be the stronger of the 2, looks likely.

Yes lots of el ninos from the 1980`s thru the turn of the century because the Pacific decadal oscillation was in its warm phase, now that has changed we will predominately get laninas…… just cycles …. nothing to do with co2, global warming or whatever get scientists more funding this month.

Cue the predictable visit of a “sceptic” who doesn’t mind insulting climate scientists. I suggest you visit http://www.skepticalscience.com/, among others, to see if you can win an argument.

There is no evidence for climate change due to Man but plenty of evidence for cycles due to nature. As taxpayers are footing the bill to the tune of a million dollars per day for “climate-change” related research in NZ, we have a right to know the extent of this so-called problem. If scientists are annoyed by this then  consider that taxpayers don’t take kindly to money taken from them under misreprentation of the truth and false pretences. It has been shown that human-caused global warming is a scam. Australia has booted out its climate scientists and slashed its eco-budget. It is only a matter of time before we do the same.