Editorial: No need for alarm over Ring’s quake prediction 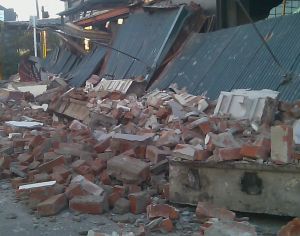 NZ Herald Editorial — It is incumbent on people who advance controversial claims or argue against mainstream views to prove their case. They must substantiate their ideas to the satisfaction of experts in the field.

“Moon Man” Ken Ring has failed totally to convince the scientific community that his method for predicting earthquakes has merit. But, unfortunately, he appears to have persuaded many people that another large quake will strike Christchurch tomorrow.

Quite why they have been taken in by a view devoid of scientific underpinning is something of a mystery. Perhaps it is something to do with the fact that earthquakes, the cause of such death and destruction, cannot be predicted.

It is only natural to seek certainty, particularly in fraught times. There is, therefore, comfort of sorts in being advised when a quake will strike. But there is also heightened alarm. When people say they plan to flee Christchurch on the predicted day of danger, it is time for the scientific community to speak up.

Vulnerable regions could be identified and the likely magnitude of a quake could be predicted, but not the precise locality, depth or timing, he said. There can be no certainty.

On another tack, Government minister Nick Smith said he would lunch in one of Christchurch’s highest and oldest stone buildings tomorrow. He has a doctorate in geotechnical engineering. If men with such scientific credentials are not alarmed, nor should Cantabrians be.

– This is an editorial by the Weekend Herald

So was that 5.1, on the 20th of March, the biggest aftershock since the 22nd of Feb, enough for an apology from the masses of media attacks? Ken Ring has been put through an amazing amount of negativity…the guy is just trying to suss out a formula for people to be prepared by. It’s about being more aware of your surroundings, not to be afraid of life!

GNS said there was a 5% chance of a 5 aftershock on that day
and it occured
not sure if it was worth people leaving CHCH for the weekend though?

I’m predicting there will be further earthquakes in New Zealand. And sometimes it will rain, other times it won’t. LIkely to be cold over the winter months too.

There you go. 100% accurate methinks.

From the Weekend Herald article “…If men with such scientific credentials are not alarmed, nor should Cantabrians be”.

How many times have experts been wrong?

This comment alone shows the arrogance and makes me even less likely to trust them – it’s coming off as a huge ego-game. Anyone that I’ve ever known to have such a big ego can go jump and live their fantasy-filled lives where they are kingpin.
I lost any respect I would have had for Nick Smith when I read that a few days back. I’ll actually never respect another word that comes from him – he forgets that that show of arrogance actually tells a great portion of voters that think there might be something in Mr Ring’s ideas that they are ridiculously stupid.
He can have his lunch and polish it off with a glass of wine. Thank God he’s not in my electorate.

At least Ken Ring’s supporters don’t feel the need to blow their heads up to “perigee” size.

Experts should be pretty happy – those who have listened to Ken Ring are probably some of the most prepared and organized people for the “Get Ready. Get Thru” campaign.

Finally, Weatherwatch – thank you. I know it’s a contentious issue but I respect you for not censoring the discussions (or topic) and allowing people to talk freely about it.

I would not be encouraging people to not trust or listen to the experts
that is a foolish thing, and an arrogant thing to be suggesting

note, the experts are not saying , either, to not be ready for more aftershocks