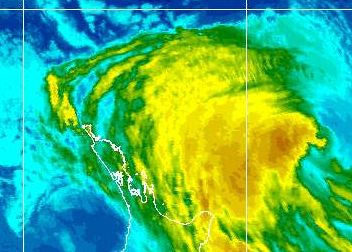 Swells of 4 metres will tonight contribute to dangerous waves and a high risk of coastal erosion along the North Island’s east coast says WeatherWatch.co.nz.

The big swells, caused by ex-cyclone Bune, will continue to build in height overnight then ease during Thursday.

WeatherWatch.co.nz, which this morning said severe weather was now “very unlikely” as the deep low continues to churn just off the coast, warned residents along the eastern coastline to be aware of possible beach erosion as bigger waves moved in.

The centre remains about 450kms offshore and isn’t expected to get much closer.

A strong southerly has blown across East Cape with thick high cloud spreading across much of the North Island, but started to thin out in the north this afternoon.

WeatherWatch.co.nz says that while severe weather on land was unlikely severe beach conditions could affect vulnerable coastal properties from East Cape to Gisborne and south into Hawkes Bay.

The low is very slow moving and dangerous seas and beach conditions are expected for the rest of the week, with the highest swells and waves peaking overnight.

I’ve been surfing at Orewa Beach tonight. Waves up to 2.5 meters. What was interesting was that metservice forecast 4.5 meters on East Coast and other marine websites, swellmap, buoyweather, and marineweather all showed about .5-1 meter. This time met service was cleary on the button, well done!

our usually quiet whitianga harbour got big waves, strong rips and massive surges today. high tide was around 5pm and the waves and surges were reaching the grass verges of the beach.

waves coming into the eastary at tairua