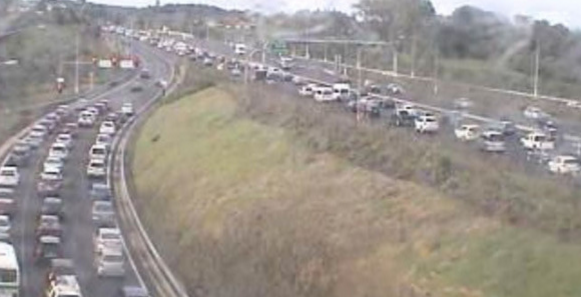 Holidaymakers trying to head north and south of Auckland are caught in huge traffic jams, with motorists trying to escape the city in both directions.

The left lane southbound on the Southern Motorway was blocked as a result of a “nose-to-tail” crash on the Takanini off-ramp and the New Zealand Transport Agency (NZTA) is urging people to avoid the area if possible.

It said congestion was heavy between East Tamaki and Takanini.

All lanes are now open but motorists should still expect delays while congestion eases.

A police spokesman said there were no injuries as a result of the minor incident, but it did leave some debris on the road.

The road is currently being cleared up, he said.

There are also delays on State Highway 1 between Orewa and Warkworth.

Earlier, a minor crash and reduced visibility due to fog caused traffic hold-ups near Bombay, south of Auckland.

Traffic was queued at the turn-off to State Highway 2.

There was better news for Wellingtonians heading north for Easter.

Fog cleared on the Rimutaka Hill Road, and visibility has improved on State Highway 2.

Emergency services are at the scene of a serious car crash that’s injured up to seven people, and at a separate fatal crash.

He said the crash happened about 10.45am.

There was four people in one car and three in the other, and one person had been flown by rescue helicopter to hospital.

Meanwhile, a vehicle has run off the road and crashed into a tree in a rest area down a bank on State Highway 77 at Methven, Canterbury.

There was only one occupant in the vehicle at the time of the crash.

Police at the scene are trying to establish the cause of the crash.

“Why the rush?”, police ask of speedster

A driver was caught travelling close to double the speed limit on a wet and stormy Waikato road yesterday, just as the Easter holiday period began.

Travelling 82km/h in a 50km/h speed zone, the motorist was zapped by the Waikato Roading Police Team yesterday afternoon.

A photo on the police unit’s Facebook page, that earlier this year caught a motorcyclist travelling 169km/h, showed the speed radar’s reading.

It also showed the wet and stormy conditions outside, which have sparked widespread travel warnings as motorists head away for the long weekend.

“This just happened in a 50km zone on a very wet and busy road near Paeroa,” said the Facebook post.

“Seriously? Why the rush, and why the risks? No excuses!

“It’s wet and our roads are getting busy, and it’s gonna get even busier! Time to exercise some patience and start driving to the conditions.”

“If you’re a passenger and your driver is taking risks speak up.”

The official Easter road toll period started at 4pm yesterday and continues until 6am on Tuesday.

Last year there was one fatal crash and 101 injury crashes that left 29 people seriously injured during the holiday period. Nearly all of those crashes occurred on the open road and 40 per cent were the result of a driver losing control or running off the road.

The NZTA’s road safety director Ernst Zollner said yesterday that 279,000 more vehicles on the country’s roads compared with a year ago increased the potential risks for drivers.

“We all need to approach the long weekend with a ‘safety first’ mindset to minimise the chances of making mistakes that can cost lives and cause serious injuries,” he said.

Holiday periods also meant motorists were more likely to spend many hours behind the wheel and he warned fatigue could be deadly while driving, especially travelling unfamiliar roads.

“We all make mistakes some times, but mistakes on the road can have serious or even deadly consequences, so ensure your car is road fit, keep your speeds down, drive to the conditions and stay alert,” Mr Zollner said.

Mr Zollner said one of the simplest measures to keep safe was to reduce speed.

“If you’re out socialising, please take it easy on the alcohol, and look after yourself and your mates. This includes making a plan to get home safely, and not driving after drinking. We also know that a large number of assaults and family violence incidents have alcohol at the centre, while around a third of all fatal and serious road crashes have alcohol as the main contributor.

“Similarly, following a recent spate of diving related deaths, please take care out in the water and ensure you are well prepared with the right equipment and that someone knows your plans. The same applies if you’re heading into the outdoors, so that you get home again safely.”

“We hope that making motorists more aware of the serious consequences of driving under the influence of alcohol or drugs, not wearing seatbelts, or a moment of distraction, will help to reduce the risk of road crashes this Easter. Please take road safety messages seriously and remember the principles of first aid, including looking after your own safety if you are first at the scene of a crash.”