Early spring about to kick in! But, that doesn’t mean the snow & cold is over 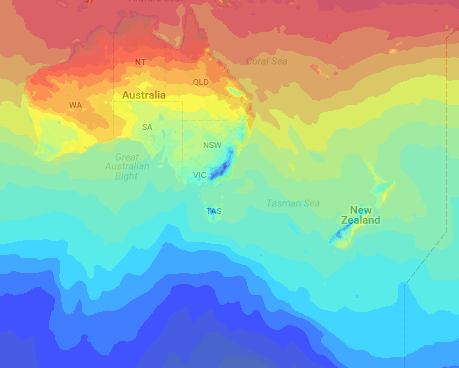 We’ve been hearing it from some of you over the past week but we’re pretty sure we’ll here from even more of you over the next week as an early-spring-like-pattern kicks in across New Zealand lifting temperatures.

Caused by a very large low pressure system in the Southern Ocean south of Tasmania, the gigantic clockwise airflow around the centre of this system will cover New Zealand perfectly – placing us precisely in the ‘squash zone’ of air pressure between this Southern Ocean low and high pressure to our east and north east. This means conditions will get windy, especially around Sunday and Monday.

The airflow over much of New Zealand will come from the sub-tropics and Australia and will be noticeable from this weekend – after heavy frosts and a cooler Friday in many places to end the week.

“We’re not saying winter is over but we are saying there are signs of an earlier start to spring conditions” says head forecaster Philip Duncan. “New Zealand lies in a ‘Goldilocks’ part of the globe where our winters are short and not too cold and our summer lasts only a couple of months and isn’t too hot”.

“In fact, after this warm spell we may get a cold southerly mid next week bringing some snow, so we’re certainly not saying winter’s done and dusted – but we are saying there are now more and more hints of spring”.

Mr Duncan says while astronomically speaking spring doesn’t technically start until the end of September the reality is that New Zealand’s location on earth means we have about a two month summer, a two month winter and eight months of spring and autumn.

The National Institute of Water and Atmospheric Research is also saying a spring pattern is coming next week.

With wintry weather likely to still pounce back at some time any added extra warmth could help produce heavier snow falls. “We’re in a very high risk time for farmers with newborn stock and the threat of heavy snow. Kiwifruit and grape growers also get nervous about frosts as we head into September so while we may notice a warming up soon please note forecasters at WeatherWatch.co.nz will remain very focused on possibly wintry weather conditions until at least about October”.

It was mid-August 2011 that saw a sudden major southerly dump snow in Wellington and even in parts of Auckland City. Septembers have also had their fair share of snow storms. However July and the first half of August typically tend to be the very coldest of winter (like January and the first half of February are often NZ’s hottest weeks).

The timing of this milder weather during our coldest time suggests that, possibly, we may have passed our coldest point overall as a nation for 2017 – but we won’t know for sure for another two or three more weeks.

– Image / Temperature map for this coming Monday afternoon shows a warming trend around NZ, especially in the east where it will be windy thanks to the Nor’Westers / Weathermap