Dust off the overcoats – #WeatherRisks for Monday 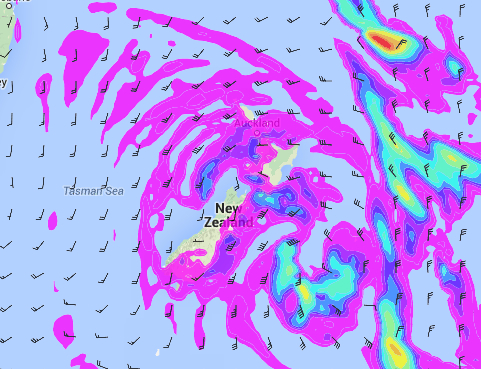 In case you haven’t heard, this week is set to give us our first real taste of wintry weather, with a low sitting to the east of New Zealand dragging cold air over the country today, while the North Island also deals with a frontal system early doors.

You can check out the specific details for your part of the world, here – but the two islands are facing two different sets of risks.

Snow is expected to fall to around 400m in North Otago, and down as low as 200m in Southland, as well as affecting everyone else along the east coast of the South Island up to Canterbury.
Banks Peninsula will bear the brunt of the weather this evening, with southwesterlies rising to gale force at times tonight, as well as snow down to low levels after the sun goes down.

Southland may also see some gale force winds at times later this evening, while over on the West Coast, heavy showers and thunderstorms will start your day, though they are looking to clear by afternoon.

Hail and wind are the biggest risks in parts of the North Island later today, after some heavy showers and rain affect pretty much everyone in the early part of the day.

Winds will become strong from the northwest right across the island, though a strong and gusty change in places will move in from the afternoon on both coasts and in the lower half of the North Island.
Hail is possible in the northern, western and lower North Island this afternoon too – signalling very clearly an end to our Indian summer!