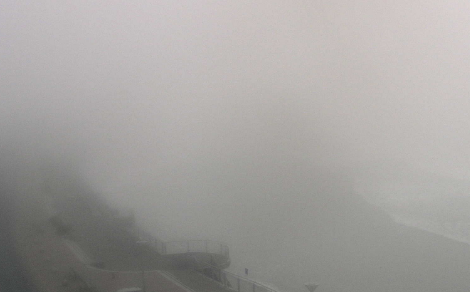 Updated 1:10pm — Longer, cooler nights are the perfect recipe for fog in New Zealand especially in March as the nights lengthen, the mornings cool but the afternoons are still warm. The sea is also at its warmest from summer – so coastal fog after a long cool night is highly likely.

This morning Dunedin’s sunny day was dashed by thick fog that cleared late morning for some but as of 1pm still remains in coastal areas – with no wind to blow it away.

The northerly at Dunedin airport is up from just 1.9 km/h this morning to 5.6km/h as of 1pm, with gusts to 9km/h. Or put another way, the winds are basically calm with gusts to human walking speed.

The fog is now starting to lift – and a sunny afternoon is on the cards for many, but the coastal fog is being stubborn for some areas and my linger into the afternoon.

Some flights today have been cancelled in and out of the city.

Overnight tonight a cold front will move through with showers and a windier SW flow ensuring fog is unlikely across Saturday in Dunedin.

– Image / St Clair Beach in Dunedin as of 10:35am, courtesy Dunedin Council

Thick fog in Invercargill this morning too though Metservice insisted on calling it ‘cloud’. Cleared to a gorgeous day..