Dunedin man evacuated after ‘canyon’ opens beneath his kitchen 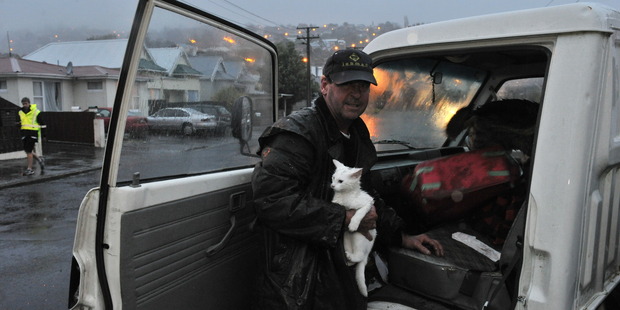 A Dunedin resident was in for a shock when he looked out the window to see a slip had opened up a ”canyon” in his section, leaving his kitchen hanging in mid-air.

Marty Duffy, who lives up a drive-way at the end of Allen St in Northeast Valley, his cat Honky and his dog Belle were evacuated by police about 4pm yesterday after there was a major slip in front of his house about an hour earlier.

He was in the house when the slip opened up a ”canyon” in his section and left his kitchen hanging in mid-air.

”I just heard all this banging in the kitchen and went out there and opened the window to have a look outside and the window wouldn’t open.

”So I looked out the other window and … where there was a paddock there is now a bloody great canyon.”

There was about 200 tonnes of earth on his driveway, which meant he could not get his vehicle out. He hoped the whole house would not collapse overnight.

”But, it could happen, that’s why the police wanted me to get out of there quick.”

He was staying with his girlfriend on the opposite side of Northeast Valley and hoped to get hold of a digger to clear the earth on his section today.