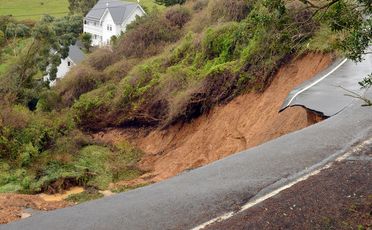 A large landslip forced the evacuation of 11 houses in Dunedin early this morning.

Police said emergency services were called to the scene on Blanket Bay Rd, Sawyers Bay, about 4am.

It is the same location where a landslip knocked over trees and caused property damage early on Thursday.

Firefighters had to assist one resident caught up in the latest slip due to debris blocking her driveway.

If the affected residents did not have an alternative address to go to they were taken to the Port Chalmers fire station.

The slip happened when it was dark so the extent of the damage was not yet clear, police said.

Dunedin City Council engineers would be at the scene at first light to assess the damage.

In Thursday’s slip, Blanket Bay resident Polly Mustard said she was woken about 12.30am by a cracking sound and when she investigated, discovered a tree had landed on her silver Audi A3, damaging it and shunting it 1-2m, and blocking the road.

“I heard an almighty crack and heard trees come down and I knew it was on my car.”

Another tree had also fallen and left debris all over her driveway, preventing the Mercy Hospital nurse leaving her property.

The asphalt driveway had only been re-laid a month ago.