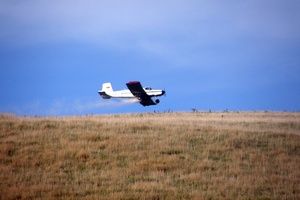 WeatherWatch.co.nz and CountryTV continue to receive emails from farmers across the North Island desperate for rain after months of dry, windy, weather.

While the New Zealand Government says conditions aren’t widespread enough across regions for droughts to be delcared, those unfortunate enough to be in a dry zone are finding conditions tough – even tougher than last year, in the midst of the worst drought in half a century.

Some have been telling WeatherWatch.co.nz this since the end of last year – and have received little rain since then.

“Natural stock water has dried up and northern facing hills are becoming dusty. and lifeless. Southern country is still a bit green from the occasional showers”.

But Mr Lancaster says farmers are becoming more proactive through summer and are more prepared for this situation by developing water supply schemes and quitting stock earlier through summmer.    “Prudent farmers are now down to minimal winter stock numbers.  Our concern is that there now isn’t much growing time left this autumn for pasture renovation and to  build up feed for the winter. Several frosts already have destroyed corn and pumpkins, and reminded us of winter ahead”.

WeatherWatch.co.nz says the two pieces of better news for those farmers needing rain is that the second half of April sees more life as far as rain and showers are concerned.  There is also no evidence of any significant cold changes coming – meaning temperatures will continue to slowly slide towards winter – and in the upper North Island above average highs continue as summer-like weather conditions extend well into this month with no immediate end in sight to the warmth

Rain  we got about 10 mins of rain/ or drops of some liquid sort from some darken clouds.. but it sure isnt here now.. the gentle breeze took all that moisture and your weather Map Phil  Duncan shows everyone else will get the rain very little will drop near Feilding or Palmy North..  humid weather at night..

The grass is brown and bare in many areas, the water tanks go a third of water in it, the leaves are slowly changing on the trees and a few have fallen.. the garden is dead (amazing our weeds can survive) the ground is cracked and so dry even a folk is hard pushed to get into the ground.  Would this be a sign of what to expect in winter? if it comes or will it be a cold cold dry winter… or something like the states got?

Even in drought, WeatherWatch is the clear winner. Rather than just dowdy and bland old forecasts, you give us the news and keep people informed about weather patterns like this drought. That’s great because no one else does that. We have a lot to be appreciative of. If only NIWA would pull its horns in and work with you guys properly, for the good of the people rather than bloody profit. As for MetService, nah written off, their core interest is pure profit and business. You only had to read that arrogant sounding “how great we are” report they put out recently. A national centre of meteorologists that doesn’t even do research as it slows them down. God that must be a boring and dull place to work.  That mentality is exactly why we are at the stage of updrafts storms long being here and ice storms coming off the hills never being recognised or forecast, let alone warned. One of the best forecasters in the world for warnings … yeah right. 130 km/h gusts don’t get warned here either and we get a lot of destructive wind. No research, no find out, keep forecasting summer throughout winter.

The big flaw with regional forecasting, climate and weather wise is that only the main centres are considered. While stat’s can be normal where temps are taken, it can be completely abnormal in other parts which are not considered. i.e. Paraparaumu 17C and Paekok 2.5C and hailing with the level of cold at the same time, and then to be told we had the national high. Yeah Right. Makes a complete mockery of the stats, because they are generalised. I know how those drought ridden areas feel, we have often been through it here … in 2013 Kapiti Coast rainfall readings were released after the drought, when we’d still received 0.0 mm.  It is why I stopped reading climate reports, as they do not represent us. Same with “Kapiti” getting simple rain while we are being literally deluged and blasted with flooding and damaging wind. Science needs to adapt to Climate Change by taking these sorts of anomolies into account for the big events like drought, so communities in trouble can get the help they need.